Hey everyone! Happy New Year. Nine days into the new year, and this is my first article. I haven’t done a ‘best of 2006’ list, but it’s coming. Anyway, the other day, I was thinking of a toy from my past. A toy called ‘Skateboard Smack-Ups’.

You see, back in the 80s a baseball card company, named Topps, took a chance by releasing Garbage Pail Kids. They did very well, kids couldn’t get enough of them. And it wasn’t just the boys after ’em. Girls collected them too. Many toy companies saw this as a way to cash in on the gross market. Many products were made. From Madballs to Mad Scientist’s Dissect an Alien kit, each one grosser than the next.

It was all over the place. Kids were eating that stuff up. One day, some brilliant executive at Playtime toys had an idea: 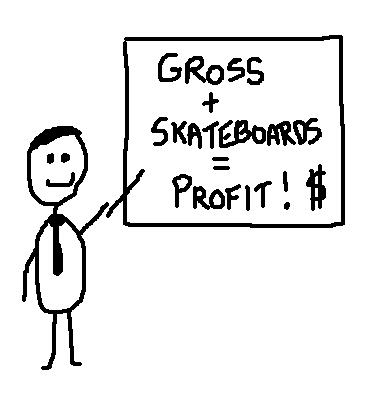 On his presentation, he suggested that something gross mixed with a the 80s skateboard craze would equal big bucks. And, I don’t really know if he was right, but it made an impression in my youth.

So, lets look at these unfortunate skateboarders. This first action figure’s name is Ronnie Roadkill. He was riding around through town on his board when all of a sudden, he hit a raccoon. Don’t ask me how it ended up on his head.

This is Amy Asphalt. From the way this figure looks, she must have fallen into some hot asphalt and gotten back on her board. There’s no way she rolled through some asphalt, since her wheels are totally clean. Anyway, you’re starting to get the idea with these figures. They’re very similar to Garbage Pail Kids.

Here’s Carrie Cardoor, who ran into a cardoor, and Betty Bumpers, who ran into the bumper of the car. Somewhere there’s a car missing both a cardoor & bumper.

I don’t even understand Rich Stiched. He looks like a mummy or something. And his head is attached to his butt. His name should be Melvin Malpractice.

To speed up this long boring article. Here’s a picture of four of the figures. From Left to Right – Sammy Stop Sign, Timmy Tire Track, Rich Stiched, & Patty Plateglass. I remember having Sammy when I was younger. It was lost long ago. This most disturbing one here is Patty, since she’s got shards of glass embedded everywhere in her skin.

Next is Lois Lowbranch. Instead of a branch knocking her off her board, she took the branch with her, along with a bird’s nest. Wow, how clever.. Hahahahahhahaha….

Here’s my favorite of the bunch, Tammy Tailpipe. I mean, first of all she’s fat. Second she was freakin impaled by a tailpipe. How does that happen? She must be very short.

So, anyway, there’s a look at a few of the ‘Skateboard Smack-Ups’ from 1986. Back in the day, they were hilarious and a great novelty. Now, they just seem pretty tame, and very unoriginal. It seems that after seeing people eat a horse penis on tv, these things seem pretty uninteresting. So, from a 29 year old perspective, I don’t think they’re that cool. But, from a 8 – 9 year old perspective (which is what I was at the time), they’re the greatest thing ever!

12 thoughts on “A Salute to Skateboard Smack-Ups”