Well, time for another one of my trips down memory lane with classic commericals. Only, this time, we’ll check out some Christmas ones.

We’ll start the ball rolling with the most popular cookie, Oreo. In this commercial, they easily were able to make it into Christmasy by having a little kid lay out some cookies for Santa. If you watch closely, we never see Santa leave any presents, but he still spends about 20 minutes eating the cookies. Which leads me to believe that even the naughty kids will get a visit from Santa, but he’ll only be there to eat the cookies.

Here’s a classic commercial, that makes its way back almost every year. It’s almost like every other pebbles commercial: Barney dresses in some disguise, tries to steal Fred’s Pebbles. I never really understood the premise. I mean, aren’t Fred & Barney close friends, why would he steal from his friend. Also, why can’t Barney afford cereal? Anyway, in this commercial, Santa tells them to stop fighting and start sharing their cereal.

McDonalds has a way of making these tear-jerker commercials around the holidays. They don’t really advertise any food, they just tell a story to get you choked up enough to feel emotion for the huge fast food conglomerate. In this commercial, for some reason a star falls from the sky, so, Grimace & Birdy think it’d be a great gift for Ronald. Why would anyone want a star? Wouldn’t it burn their hands. Anyway, Ronald, tells them the star belongs in the sky. He really wanted to say was: “WTF?! , What am I going to do with a star? This is retarded”. But, he decided to hold back his anger, after all, it’s Christmas.

Here’s a commercial for the worst video game ever. ET, was a hot back in the early 80s. So, of course, Atari wanting to cash in on the success, got permission from Steven Speilberg to release a video game, which later ended up in a landfill in New Mexico. Anyway, the commercial would have you think that this game was the best game ever. But, it’s a pretty neat commercial, and it shows ET playing Atari.

Here’s my first of two 7Up commercials on this article. I chose this one, simply because I remember this calendar when I was a kid. We had picked one up at the local Kroger. It was a ‘countdown to Christmas’ calendar. But, this one had it’s own neat little quirk. You got to glue a cottonball to Santas beard everyday. When Santa’s beard was full, it was Christmas! Sounds kinda lame now, but we didn’t have this ‘internet’ back in my day, so Cottonballs were the only excitement I had.

I remember my brother, Jeff, getting this camera. I can’t remember if he got it for Christmas or not, but I remember him having it. It was one of those cameras that was easy enough for an idiot to load. There was no film to mess with. The commercial is pretty neat, because apparently toys love to take pictures of themselves when no one else is around.

Before there was a KFC, there was Kentucky Fried Chicken. Yes, it’s the same thing. But, now you can’t call anything what it is. So, initials are what it’s known as now. Anyway, here’s your typical Christmas commercial. This premise has been used 1012341208530823 times. I’ve seen it everywhere from car commercials to Honey Nut Cheerios. Even someone as cheap as Scrooge can afford our prices.

Yeah, I remember this lame jingle. It was pretty bad. There was also a time when M&Ms came in plain & peanut. Now, they’re milk chocolate, peanut, crispy, peanut butter, almond, mint, mega, mini, etc. etc… Yes, but, this was the 80s, and we wanted our candies simple, dammit.

Here’s a commercial from my favorite Cereal! I love cinnamon toast crunch. Actually, I can’t afford the real stuff anymore, but the generic version ‘cinna-mini crunch’ tastes just as good. Anyway, this commercial suggests that you should leave out Cinnamon Toast Crunch for Santa instead of cookies. Wouldn’t the cereal get soggy? Anyway, this is one of the few commercials with all three cooks. They later removed 2 of them and just had Wendell as the solo cook.

Here’s the 2nd 7 Up commercial. I had to put this one on here because of spot! The 7Up spot was one of the greatest promotional characters. He was about as good as the Domino’s pizza ‘Noid’. Both of those characters even had their own video games. But, because some CEO thought it was a good idea to change their promotions, these characters are gone. At least, Spot will live on in this great Christmas commercial.

Here’s one cereal you can count on every year!. Christmas Crunch!!!! Yes, It’s delicious. Back in the 80s it was just crunch berry cereal with red & green crunch berries. But now, it’s got red & green Christmas shaped Crunch berries. It’s still just as good, but with shapes. Anyway, I don’t think the cap’n has had a tv spot for Christmas Crunch since the 80s, but don’t fret, it’s still around. Go pick up a box, I know I did… 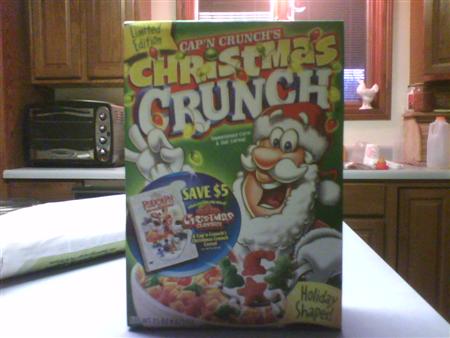 Yum… Anyway, I hope you enjoyed my look at these commercials.