Angie’s computer had just broken down, I diagnosed that they cpu fan was out, and she needed a new one. Well, she lives in Sikeston, which is far away from any convenient computer store. So, the closest place to go was Circuit City in Paducah, KY. So, we headed down to Kentucky. After we picked up the part, I told Ang that we should check out walmart to see if there was any line yet for the Wii. You see, the Wii came out the next day, and a 24 hour walmart store would release the thing at 12:01 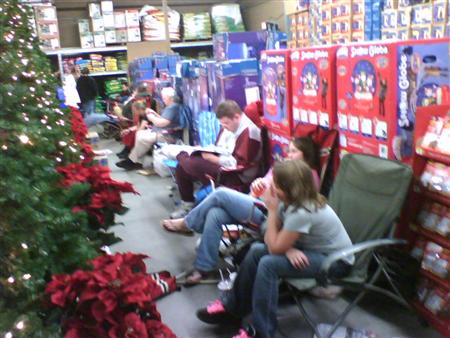 Yep, there was a line. There were 14 people in line waiting for the Wii at 2:30 in the afternoon. I asked the dude in the front of the line how many Wii’s they would have in stock. He said they have 20 in stock, and he asked if I wanted to be #15 in line. Angie told him yes, because she knew I wanted to get my hands on one. So, I became #15 in line. So, I grabbed my Nintendo DS from my car, and she grabbed a couple folding chairs from the sporting good section. 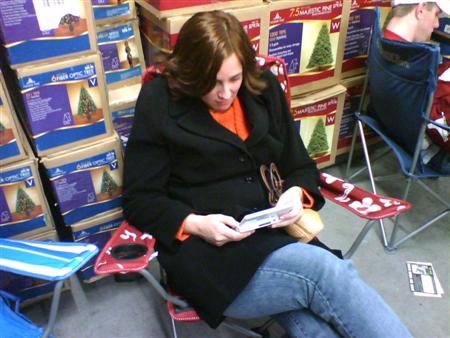 She told me she’d wait with me. I couldn’t believe she would actually ‘nerd it up’ with me and wait in line. It something not many girls would do, so I’m pretty lucky to have a awesome girlfriend. The first nerd in the front of the line convinced her to get one too. She figured if she was going to wait almost 10 hours, she should get one too. At least if she doesn’t keep it, she can sell it. So, she became #16 in line.

They kept the line in the back of the lawn & garden section, which is now taken over by 1000s of Christmas decorations. So, we were indoors, which was very nice. 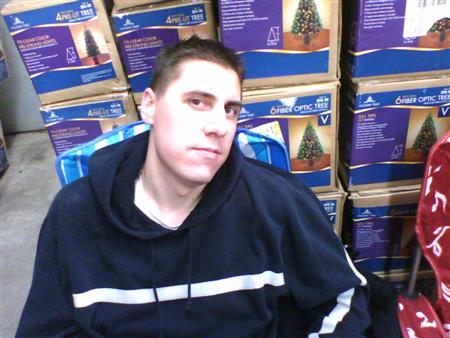 We passed the time by playing Mario Kart DS, playing seek & finds, puzzles, cards, uno, & celebrity name games. It got pretty boring, but we were able to leave the line to go into walmart to goto the bathroom or do whatever. The guy in front of the line kept a list, so we weren’t worried about losing our places in line. 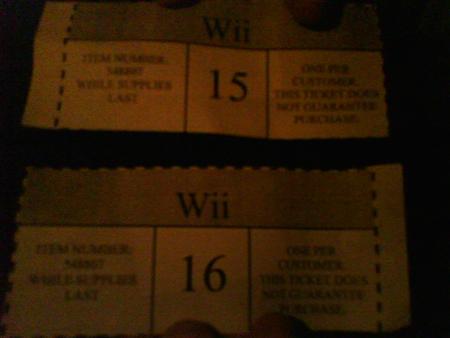 At 10pm, Walmart decided to hand out ticket vouchers, which you would use to buy your Nintendo Wii. If you didn’t have a ticket, you weren’t getting a Wii. We took the 2 hours off, by taking a drive around Paducah. There wasn’t really much to do. We were going to stop and get a alcoholic drink, but Angie was getting a headache from all the nerdy talking going on in line. So, I got a milkshake from Steak n Shake, and she got a Rock Star Energy drink from Walmarts Vending machine. 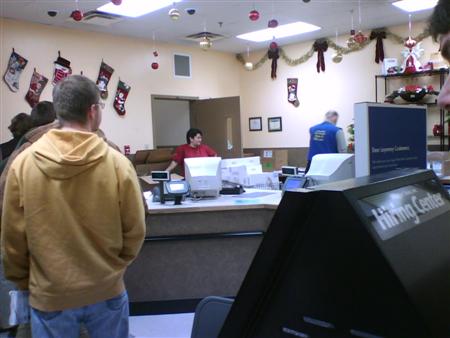 Finally, it was 12:01am, and they were able to sell us the Nintendo Wii. Holy Crap!, this was the longest wait ever. We were fucking exhaused. I mean really tired. And it seemed like the lady at the register was an idiot. She couldn’t figure out the machine. With only 14 people in front of us, we didn’t get to the register until 12:40. The worst part of the wait was these fucking dorks behind us that wouldn’t shut up. They were apparently experts on the Wii, although, they didn’t own one, plus they didn’t have tickets to buy one. 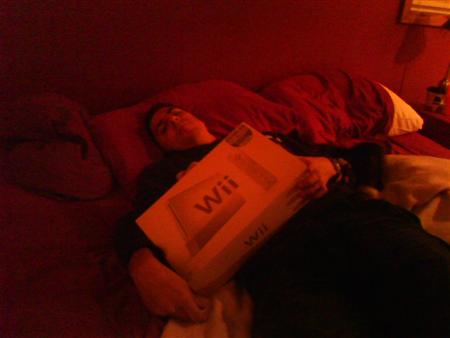 So, after getting the Wii, then driving an hour back to Angies house from Paducah, I didn’t even feel like setting it up. I was so tired. But, I had did it. I got the Wii. Hooray! 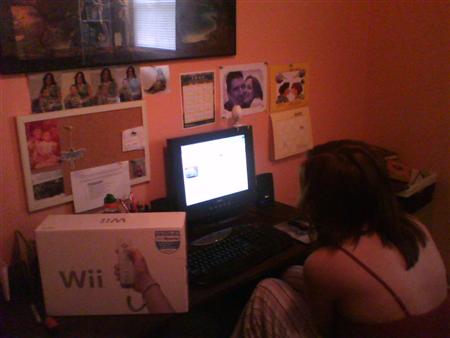 In the morning, Angie put her Wii up on Ebay. The average price it was going for at the time was $525 bucks. Not too shabby for a $250 machine. The problem was, by the time she got hers up there, it was so over-saturated with Wiis, they weren’t selling for that much. People were selling them for $300 bucks. Thats not that much of a profit. So, she took it off ebay, and decided to keep it to play with, just like me. 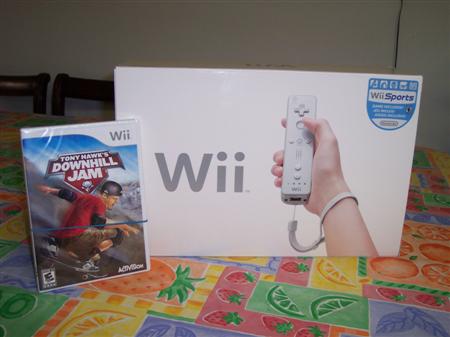 The system came with Wii Sports, but I got Tony Hawk Downhill Jam, also. I love Tony Hawk games, and I figured I would love this one too. Although, it’s not the best out of the many games he has, it’s still pretty fun. 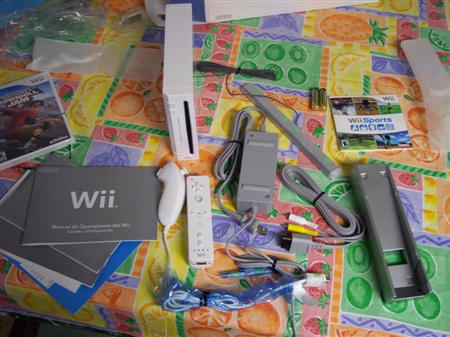 Here’s all the stuff included in the box. The Wii itself is actually really small. It’s no bigger than 2 dvd cases stacked side by side. Maybe 3 cases. 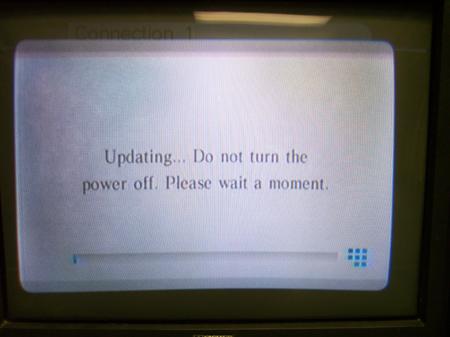 As soon as you hook it up, it takes you to a menu where you can select many different features. The first thing I did was setup my wii to connect to my wireless network. That worked fine. The problem was updating. The thing took forever to update. After researching online, I found out it was just bogged down by a couple million people getting the system & updating it all at the same time. 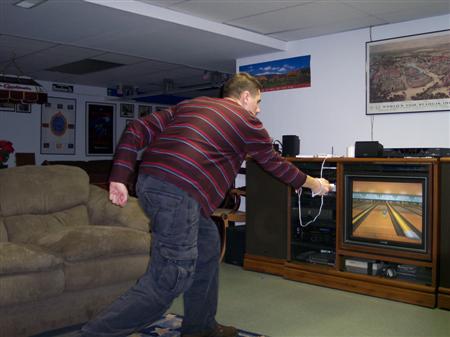 It is truely an amazing system. There is nothing like this at all. The Wii sports game that it comes with is a lot of fun. In the picture above you can see me Bowling. You can actually arc the ball. The WiiMote (which looks like a regular tv remote control) picks up all you movements. It is very responsive. 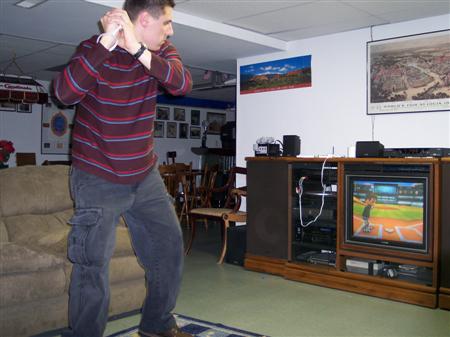 Anyway, it’s a great system, I’ve had a lot of fun the past few days playing it. Plus it’s really cool that you can download old games like Donkey Kong, Sonic the Hedgehog, or Mario 64. So, I’m giving this system a 9 out of 10. Pick it up if you can find one, I’m sure they’re all sold out.