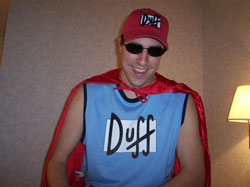 I’m back. And unfortunately, my camcorder is broken. So, who knows when I’ll get you Half-Assed TV episode 2. So, while I’m out camcorder shopping, click on the picture above & check out my latest article that shows you a synopsis of our Halloween hijinks.

As usual, it’s taken me about 50 years to update my website. Well, I owe it all to a broken camcorder. Anyway, today, I’m going to show you what happened last weekend up until Halloween.

On Saturday night, my friends Josh & Kim were having a party at their house. It was going to be mostly outside with drinking & people dressing up. You know, your typical Halloween party. Well, we totally decked out the garage. I don’t have that great of pictures from the inside. But, I do have some pictures of what we were dressed up as. 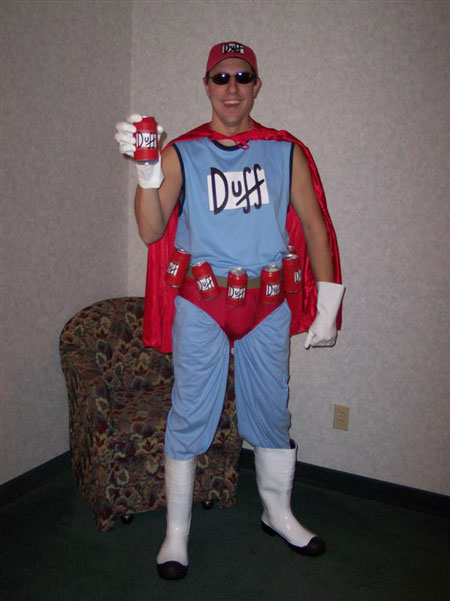 Yep, there’s me. After pondering over what I could go as to the halloween party, I decided to make myself a Duffman costume. I made pretty much the whole thing myself. If you don’t know who DuffMan is, well here’s a picture of Duffman:

Yes, it’s a re-occurring character from the Simpsons. Anyway, many of my friends thought it was great, and a lot better than last years costume, which was a ‘Punk Rock Pez Dispenser’. If I can ever get my camcorder working, I’ll have a video guide for the duffman costume on the next episode of Half-Assed TV. Here’s where I got the instructions from. 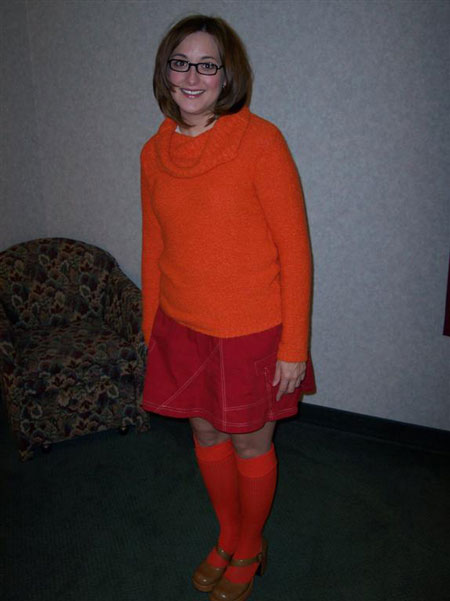 My Girlfriend, Angie went as Velma from Scooby Doo. I guess I could have went as Fred, so we would be a matching Couple or something. But, I just don’t look good in an Ascot. She looked really good. And somehow, I had a craving for scooby snacks. Later on I showed her the back of the Mystery Machine. 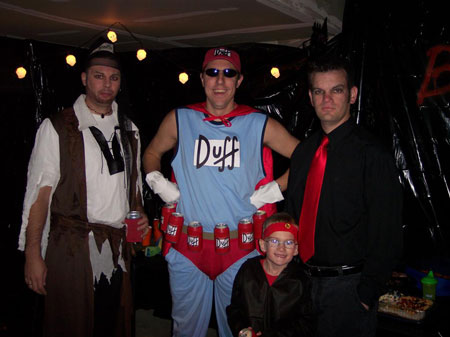 Here’s the rest of the people who dressed up. From Left to Right. Keith was dressed up as a pirate. Although, his beard has fallen off in this picture. He would have gotten the wig, but he said the wig was too expensive. There’s me in the middle as DuffMan. Caleb was dressed as a ninja. If you’ve never seen the video podcast, Ask A Ninja, check it out now! And finally Josh was dressed as Billy Joe Armstrong from Green Day. This picture kind of cracks me up because Josh & Keith didn’t break a smile to break their characters. 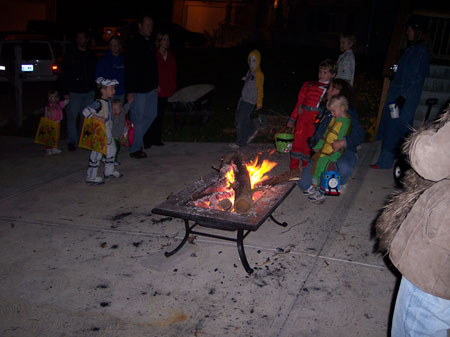 Well, the party came & went. And a couple days later it was Halloween time. We opened up the decorated garage, and decided to hand out candy from there. Josh, Keith, & I had the day off the day after Halloween. So, we drank a few. We started the fire up. And waited for the trick or treaters. 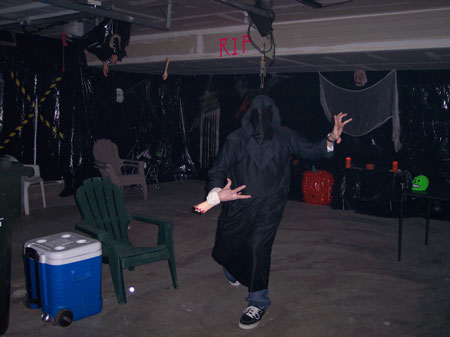 Keith was the only one of the 3 of us that dressed up again. He wore his pirate outfit. But, to get in the spirit, I found my old grim reaper costume. It’s easy to slip in and out of. So, I put that on, and taunted kids with my ‘sawed off arm’ that I was ‘holding’. In this picture, besides seeing me, you can see a few more things inside the garage. We put black tarp everywhere. There were blacklights & other ‘Halloween related’ stuff hanging up. Oh and in the ceiling we had a couple of hands that would reach down and try to grab you. 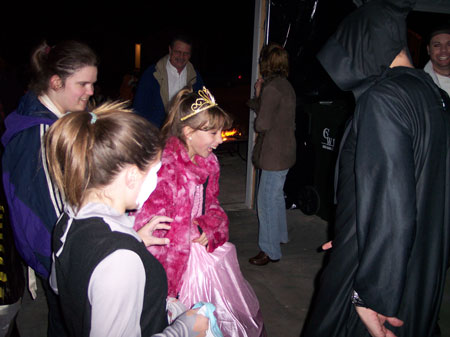 I’ve had the fake arm glove for about 20 years now. I got it when I was in 7th grade. Okay, so that would be about 18 years ago. Anyway, it’s always a huge hit at Halloween. Although, you can’t see it in this picture, you can see the reaction on peoples faces when they see it. It’s probably the best investment I’ve ever made. I think it was only like 6 bucks. 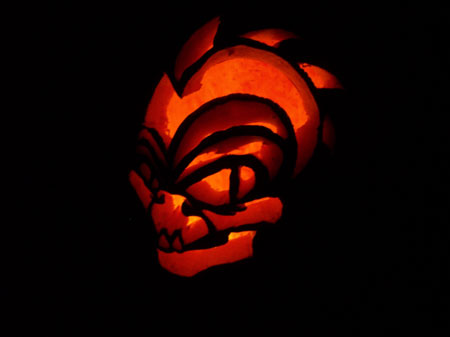 After the kids were all done trick or treating, we hung out at the fire over at Josh’s neighbor, Jason, for awhile. He showed off his kickass Pumpkin Carvings. This one is supposed to be the mythical Chupacabra. Chixdiggit sang a song about the Chupacabra. It’s a creature, that supposedly sucks the blood of goats in Mexico. I’m sure you can find all the info you need on Art Bell’s website. 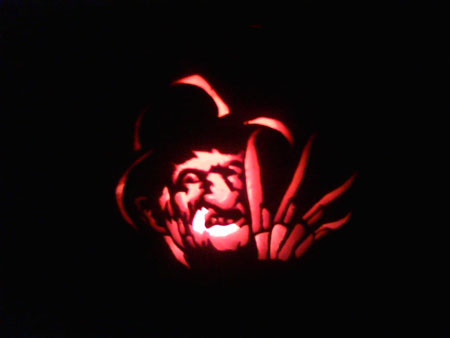 Here’s a carving of Freddy Krueger. Jason was telling me how hard it was to carve this one. I can see that all the intricate pieces had to take a while to cut out. 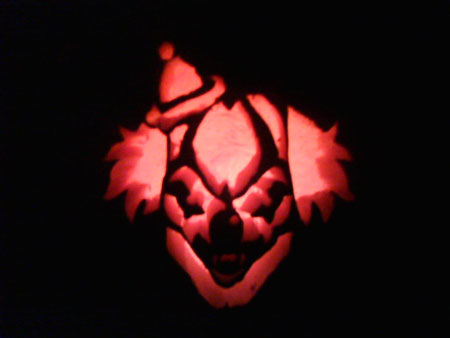 Here’s the third one he carved. It’s a clown. And I’m pretty sure it’s supposed to be Pennywise the Clown for Steven King’s book, IT.

After putting out the fire, Josh, Keith, & I, were trying to figure out what to do now. It was only 10:30, and well we had the day off tomorrow. So, after calling a few places, we found the only place near us that was open was the Magic Carpet. 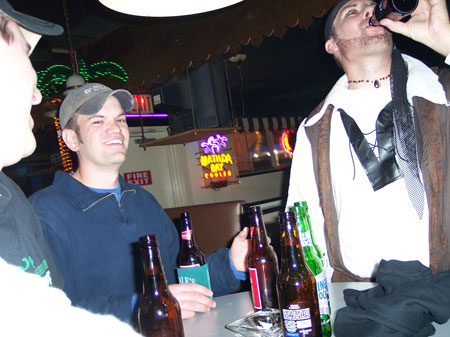 So, we drank a few up at The Magic Carpet. We thought there should be a bunch of people up there. Unfortunately, there was only about 10-15 people there. We sat around there awhile singing the karaoke version of ‘Plush’ by Stone Temple Pilots. 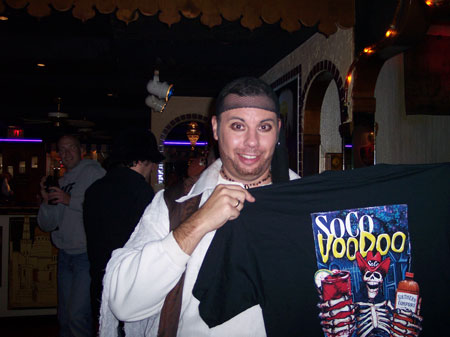 At the Magic Carpet, they gave everyone a ticket in the bar. And the DJ started calling out numbers. Out of the 10 people there, everyone got something except for me & Josh. Keith was happy, because he won a t-shirt. Of course, it’s one of those free t-shirts that all the bars get for promotions. I’m sure its something he can change the oil in his car in. 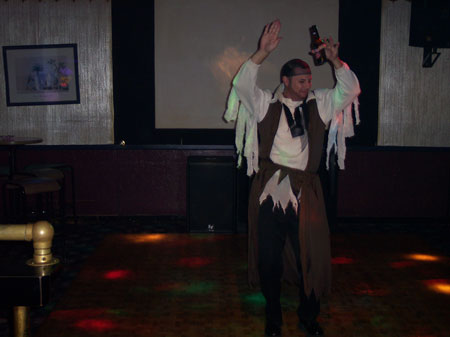 Keith was so happy, he showing off his dance moves. After the ‘Carpet’, we went to another bar, and drank something called ‘312’. It was pretty good. But, on our way home we TP’d a friends house. Of course, they knew it was us that did it. I guess we’re just not that sneaky.

So, that’s the synapsis of Halloween for me. I hope you enjoyed it. I should get back to normal here with the articles. And I hope to get out HATV episode 2. Or if I don’t, it’ll come back as a ‘lost episode’.