Well, like I do every year, I like to attend the Vans Warped Tour. It seems every year, there’s at least 4 or 5 bands that I don’t want to miss. So, I brave the heat & humidity to check out some of my favorite bands. I couldn’t miss this year, especially since my favorite band, NOFX, was playing. 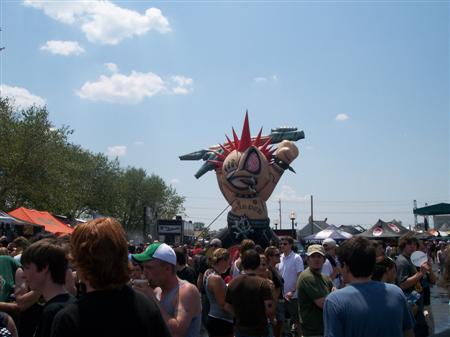 This year seemed more crowded than it’s ever been. This would be the 10th Warped Tour I’ve been to. I’ve been going since 1996. The tour has been around since 1994, but the first time it came to St. louis was in 96. It was great then, there was probably about 800 to 1000 people that year. Of course, this year there was more like 30,000 people there.

They giant punk rocker above is towering above a giant slip & slide. They introduced the slip & slide about 4 years ago. There’s was a pirate theme that year, and instead of a giant punker, it was a giant pirate. 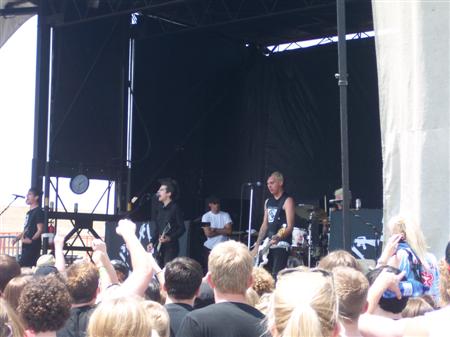 When I walked into the UMB Bank Pavilion, I heard Anti-Flag was playing. It was one of the bands I really wanted to see. They always put on a good show. I went over to watch them play. They’re a very political band, who recently signed to a major label. Lots of punks say it’s a ‘sell out’ move to go to a major label. They say it’s so they have a broader audience to convey their message. I don’t really care what label they’re on, they’re new cd is great, and they’re still the same great band. 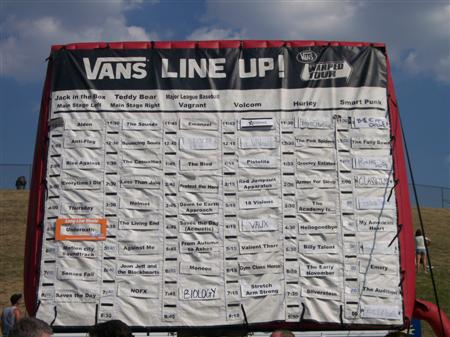 There’s the lineup, yes, I know it’s a small picture, and you can’t see every band listed. They have a large inflatable schedule. That’s really just a taste of the bands too. There’s 3 stages that aren’t even listed on this either. So, it’s literally impossible to see every band playing. There’s about 70 bands playing. 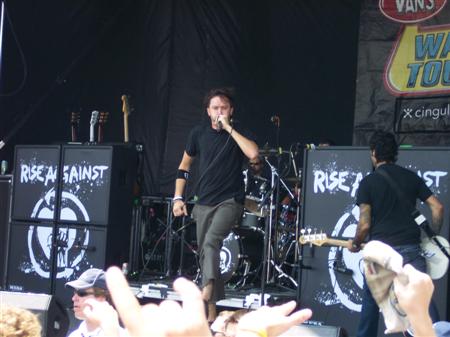 I was very excited to see the band, Rise Against. This would be the third time I’ve seen them. I missed them last year because I came in late. Oh, speaking of bands I missed. The Bouncing Souls were one of the first bands that played, so I missed them too. Damn.

Anyway, Rise Against put on a very good show. They’ve grown to have a pretty big fanbase, too. I would have to say, they were in my top three bands of the day. 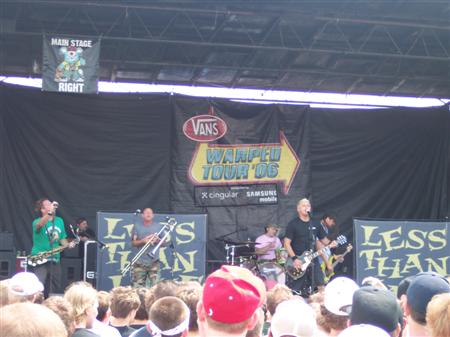 Less than Jake are always great. It’s been about 5 years since I’ve seen them last though. I haven’t been a huge follower of their music since “Hello Rockview”. I’ve heard a new song here and there from them. But, that’s the last album I’ve actually bought from them, and that’s back from about 97. I did download their newest album a couple months ago. It’s pretty good. Anyway, they were funny like they usually are. They said they’re the best band on the tour over with members over fourty. They also pulled out the squirt guns & toilet paper shooters like they usually do.

I remember back about 10 years ago they would throw out tons of merch during their set. Man, I’m really showing my age in this article, but back in ’97, when the were on the Caffeine Nation Tour with the Descendents & Guttermouth, they threw out cds, records, cassettes, patches, frisbees, pins, LTJ trading cards, candy, shirts, etc. It was like a gwar show, except you took home the stuff that they threw at you. 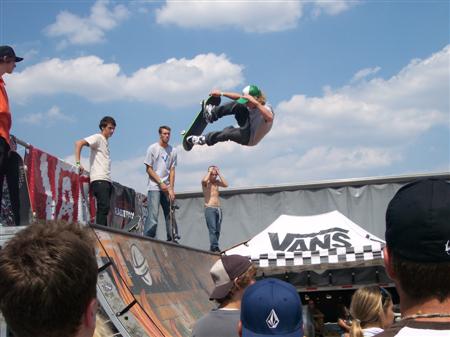 One of the aspects of the warped tour that seems to be slowly fazing out is the ‘eXtreme sports’. There used to be about 3 different half-pipes, Ramps, & Rails all over the tour. Now there is one tiny little half-pipe tucked away. I ended up taking this pretty sweet picture though when watching the skaters. But, this tour was started by Warp Magazine which is a mag for skaters, fruit booters, & bmxers. I can do without the fruit booters (rollerbladers), but there’s no bmxers at this tour either.

Anyway, while I’m ranting, I felt so old being at this show. I’m 29 years old. I started going to the warped tour when I was 19. I can’t believe how many 14 year olds there are at the show. Punk used to be more underground I guess. Now it’s more mainstream. Plus, I guess with tons of bands getting more exposure on the internet, they get a bigger fanbase. 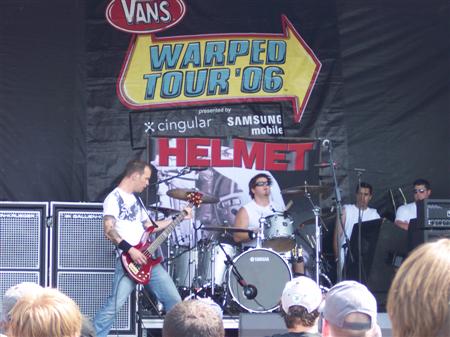 I was really surprised when I got to the Helmet set. I was surprised because there was hardly anyone watching them. I didn’t even realize there was a band playing when I walked by the stage because there was only about 100 people there, if that. I watched Helmet for a little bit. You could tell by the lead singers grey hair that they’ve been around awhile. I’m not the biggest Helmet fan. I loved the album ‘Betty’, back from the early 90’s. But, I just couldn’t get into them live. They were really tight, but it sounded very dated. That, and Helmet has a tendency to have songs that are 5 minutes long which should be 2:30 mins long. 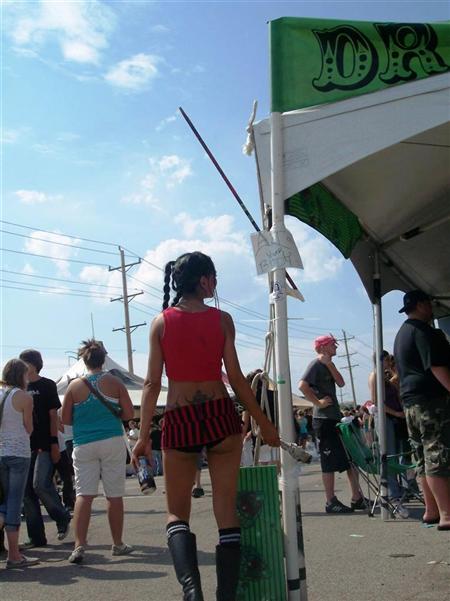 There’s tons of women around trying to spread their message. Like this hottie right here. She had a shirt on that said ‘FUCK RACISM’. nice… 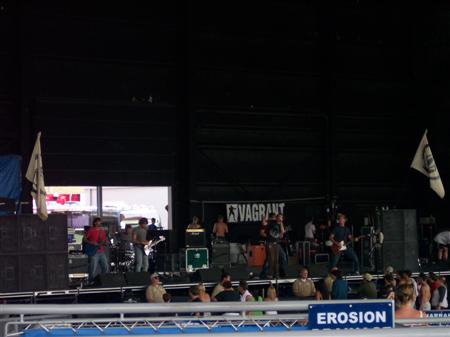 Here’s a band that I just sat and watched for a minute because the were in the shade. So, I had a chance to sit down for awhile and watch Vaux. They were okay. I wasn’t that impressed with them. They’re more of a screaming band. I like some bands that scream, but they have to have a chorus put in every once in awhile. 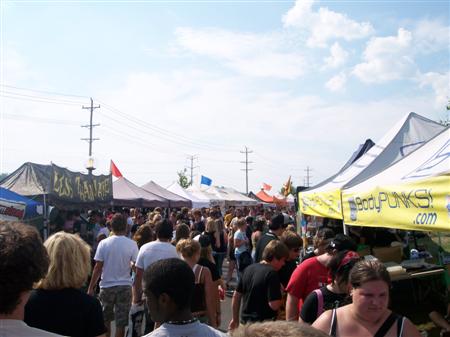 Here’s another view of the crowd. It also shows a few of the merch tents. As usual every band had their own tent to sell merch. Pretty much every record label & other cause had a tent too. Peta had a tent. I refused to stop by the peta tent. Here’s my reason why… I think it is cruel to abuse animals. I don’t like people who abuse or kill animals for pure fun/entertainment. But, if you are killing an animal for food, I see no problem with that. The lion kills the zebra to eat. We do the same thing by killing a pig to eat. Peta takes it too far sometimes & I don’t buy into all they’re propaganda. See Penn & Teller’s Bullshit dvd. There’s an episode about Peta, it’s great!

The next band I checked out was hellogoodbye. The only reason I went to see them, is because there was such a huge crowd for them. You could hardly move there were so many people. I watched them for a little bit, then realized, it just wasn’t my type of music. I don’t really get why all these emo bands have become the next big thing. 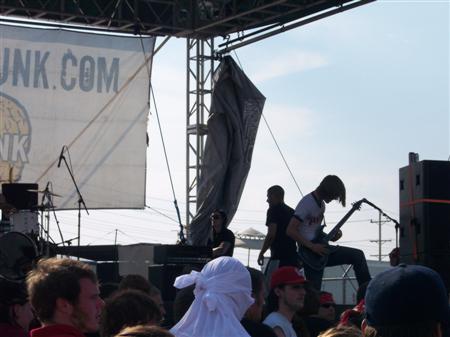 I stopped by to watch Misery Signals for awhile. And, I’m sorry, it’s just not me. Maybe I’m getting old, but it’s another screaming band. The only screaming band I can think of right now that I love is ‘Sick of it All’. 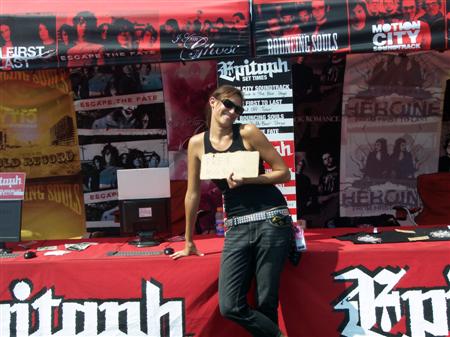 You can’t really read it on this small picture, but this chick at the Epitaph tent had made a sign that said ‘Free Ass Slaps’. Of course, I could resist, I got my free smack on the ass, and with that I picked up the new Epitaph Comp for free.

Speaking of merch. This year I really don’t need to write a seperate article on the merch I got. I got 3 comps cds (an epitaph records comp, victory records comp & vagrant records comp), 3 fat wreck chords can coolers that say ‘go to work wasted’, an angry penguin can cooler, 2 us cellular can coolers, a nofx t-shirt, & a bunch of trojan samples. 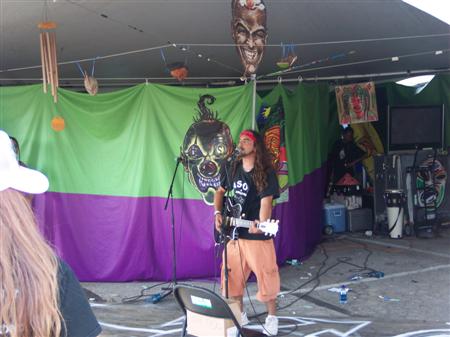 This dude, Jaytea was great. He just played an acoustic guitar and he played some funny little songs. One of the songs had they lyrics something like: “Lets go get a blood test, because I don’t think you’re my baby”. I don’t know the exact lyrics, but it was something like that. He had a couple political songs too, but he was really good. 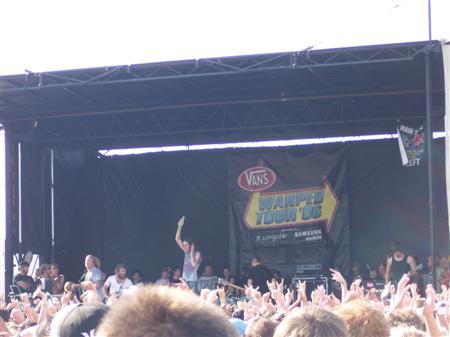 I don’t see the big hype in this band, Underoath. I think they have a couple hit songs, but they’re just like any of the popular screamo bands that are out there now. They got to play for 40 minutes instead of 30 minutes at todays show though. Energizer had a thing where you could vote online for your favorite band to play longer. Underoath won this year at the st. louis show. Last year, No Use for a Name got to play longer. 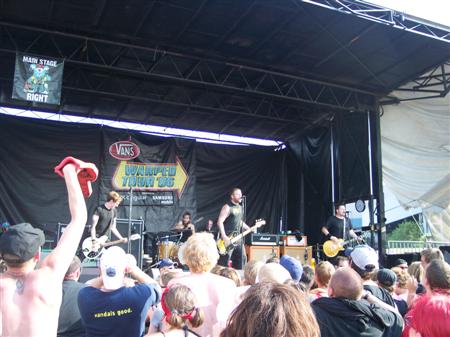 I love this band. Against me was great. They sound very similar to Flogging Molly or the Dropkick Murphy’s minus the bagpipes of course. Anyway, I loved their set. I was sad I had to leave the set early. You see, I had a chance to win Watching NOFX from on Stage!. Of course, I didn’t win, so, I could have stayed during the whole set. Oh well. 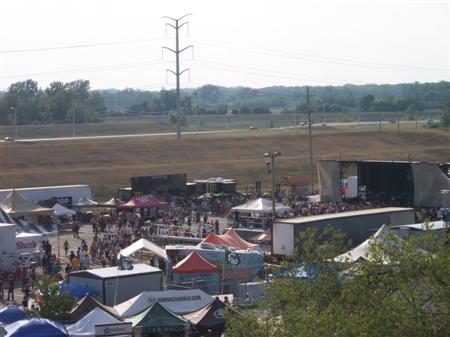 Here’s an overview shot of one section of the tour. You can see that it was pretty crowded, and there were tons off different tents from Winterfresh gum to Myspace. 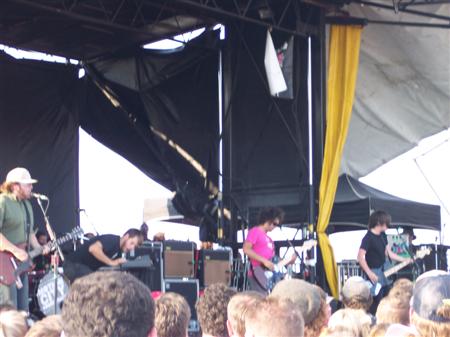 I have a soft spot for Motion City Soundtrack. Yes, they’re another emo band, but for some reason I dig them. The keyboard player for this band freaking gets into it like a coked up retard. It’s pretty amazing watching him. At many times it looked like his whole keyboard stand was going to fall right over. 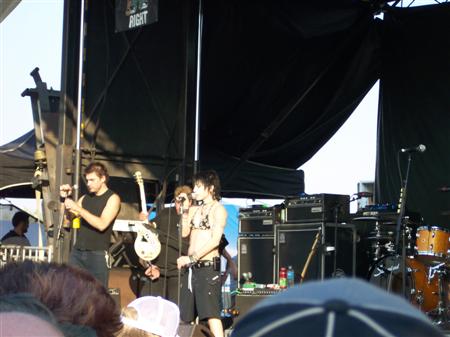 Okay, so Joan Jett & the Blackhearts was the next band I saw. I wasn’t really expecting to like her so much. I remember listening to ‘I love Rock n Roll’ back in the early 80s. Anyway, she put on a really good show. You could tell she comes from the late 70’s New York scene. It’s the great surf punk sound that the Ramones had. Anyway, surprisingly, I knew about 5 songs that they played. And yes, they did play ‘I love Rock n’ Roll’. Plus, she looks great for a woman about to hit 50 years old. 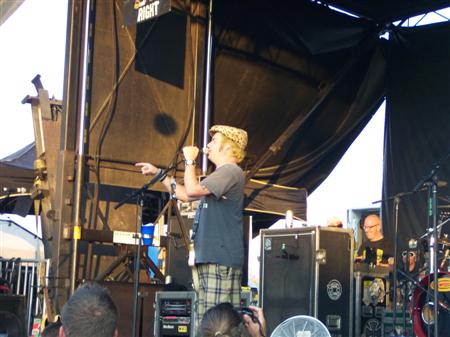 Here’s the band I couldn’t miss at the warped tour. NOFX are my favorite band. They’re hilarious, they’re political, and they’re music is great. One of the funny things that Fat Mike had was a cup holder built into his mic stand. That got a big laugh. 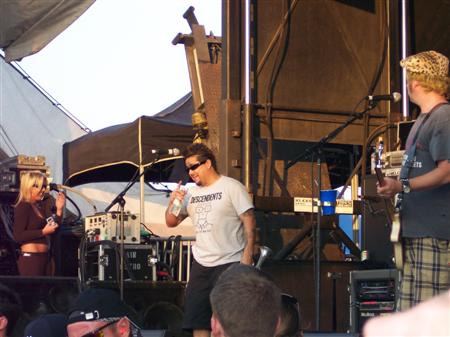 Of course, the guys had to make fun of the midwest, and how California is so much better. Well, whatever, not all of us can just move. The one problem with NOFX on the warped tour is they only get a 30 minutes set. They love to talk, so they bullshit for about 10 minutes of the set. It’s funny, but get to the music too! They were great though, and El Hefe had some hot chick over buy him taking pictures. 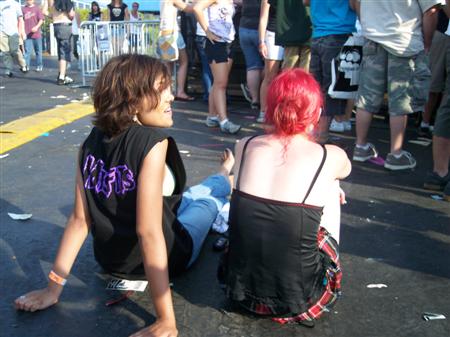 So, all in all, it was a pretty good time. I do feel like there’s too many 14 olds there. But, really what are you going to do about that. Plus, it’s always so freaking hot. I bought 2 waters for $3.50 each & 2 powerades for $4 each. So, it gets expensive, and you sweat like crazy.

I’m getting too old for this shit!