So, today I was at work, checking one of my favorite sites, digg.com and I noticed that there was some breaking news. Apparently Target & Walmart stores across the country were selling the new Nintendo DS Lite before it’s actual release date. The actual release date is on June 11th. So, I headed for the closest Target & Walmart during my lunch break. When I came back empty handed, I decided to start calling Target stores. I called 5 stores with no luck. All of the stores gave me the same speech about them not being on sale until June 11th. I finally tried a 6th store, which is pretty much out of my way, but they had them in stock. Plus, there was no mention that they couldn’t sell them until June 11th. So, I left early from work to set out on a mission. 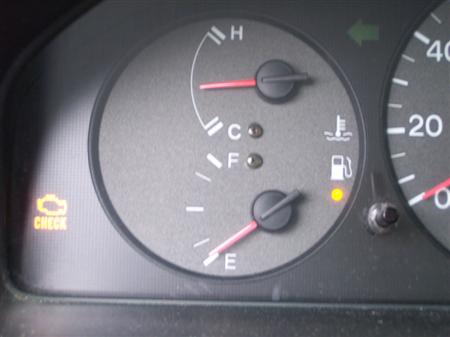 When I left work, I saw that my fuel tank was pretty much on empty. With no moment to spare, I decided to roll the dice and try to make the 11 mile trip from work to Target without stopping for gas. I figured the longer it would take me to get there, the less likely I would actually be getting one today. 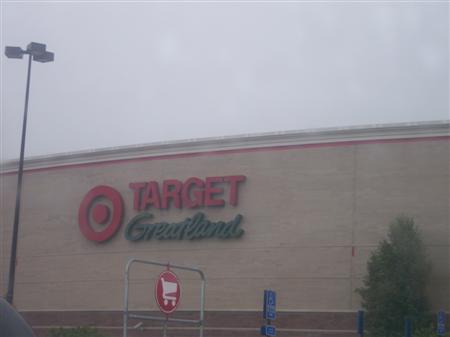 This is the target store in Chesterfield, MO. It’s actually just outside of St. Louis, but it’s still one that I have never been to before. It was a rainy day outside, but I knew it would be a little brighter if I got that shiny new ds lite. And I made it there without stopping for gas. 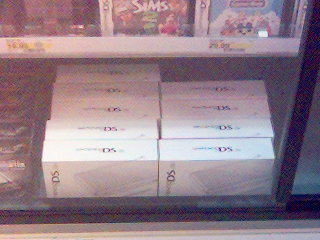 Not thinking to bring my camera in with me, I took this picture with my phone. I couldn’t believe there was 9 still sitting on the shelf. I talked to the clerk, he opened the case, gave me a ds lite, new super mario bros & brain age. I couldn’t believe it was that easy. The clerk was clueless on how much of a fine his store probably will get for selling them early. On my way out, there was another guy asking for the ds lite. He told me he heard about the info on Target selling the DS Lite on joystiq.com. He was just as happy as I was. 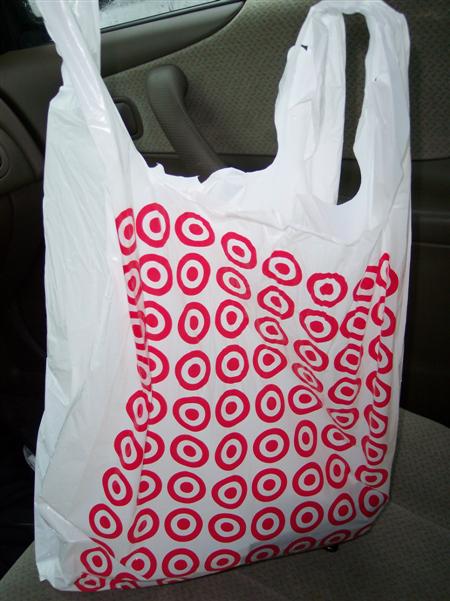 So, I took my loot back to my car, feeling like I just pulled off a heist. But, it was true. I had just gotten a DS Lite, almost 2 weeks ahead of the release date. 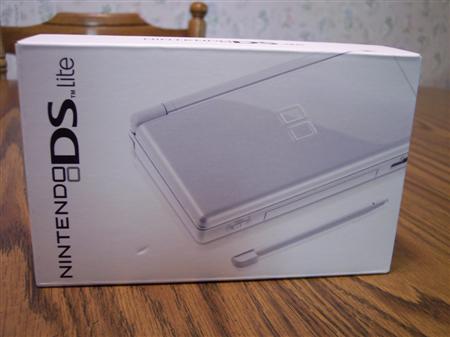 There’s the front of the box. 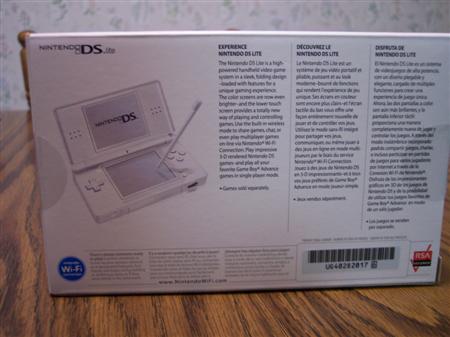 And there’s the back. 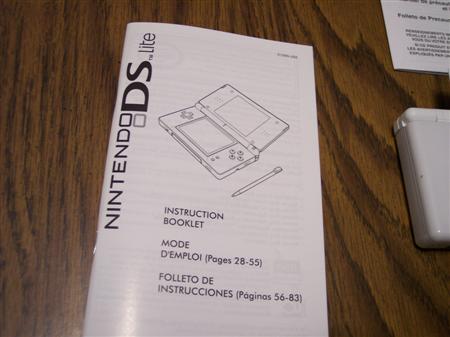 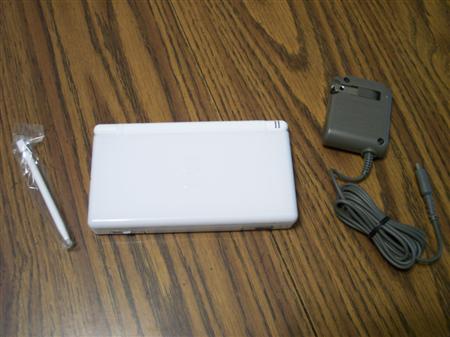 It came with the ds lite, of course, a charger & an extra stylus. I guess the extra stylus will come in handy, but as long as you keep it in the slot for it on the ds lite, I don’t see how you’ll lose it. 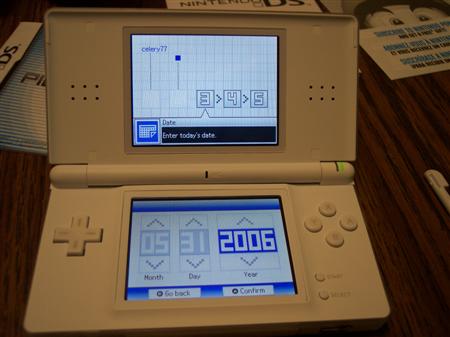 Setup was a breeze. You just had to put in your name, birthdate, date, time, etc. This is all new to me because I haven’t had a portable video game system since the Gameboy advance from 5 years ago. 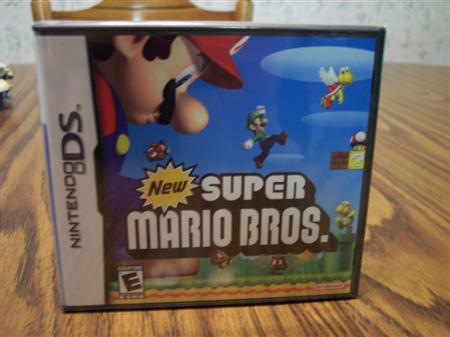 I was very happy with my game selections. I heard very good things about both of these. The New Super Mario Borthers game is so good. It’s similar to the original NES side scrollers. 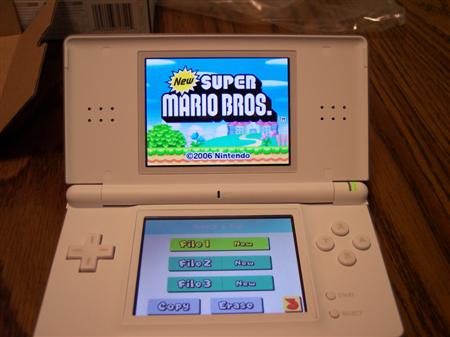 I didn’t get to play it yet that much, but there were some cool new things. Like for example, there’s a new super mushroom that turns you about 3/4 the size of the screen, and you can run over everything & kick over pipes. It’s pretty cool. Also, I noticed you can get a turtle costume. With the turtle costume, you can duck in your turtle shell & slide across the floor, knocking everything out of your way. 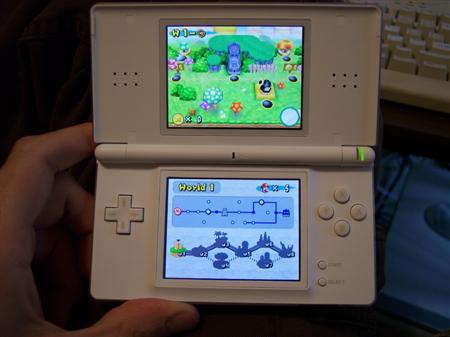 There’s also a few mini games included. Most of them are simple little puzzles. But all the mini games take advantage of the stylus / touch screen. 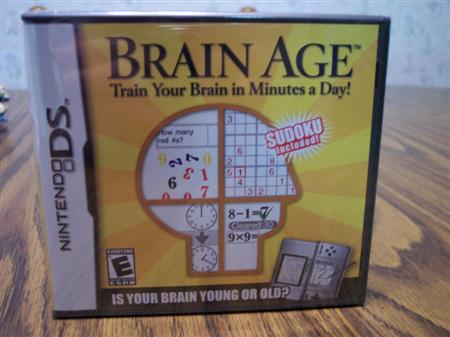 The other game I got was Brain Age. This was a very interesting game. It’s basically a game that you solve different puzzles, read out loud, solve math problems, etc. It may not sound that fun, but it’s very addictive. 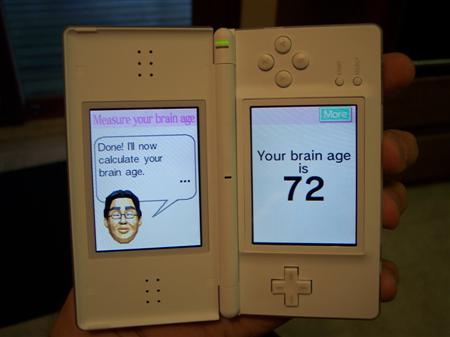 The object of the game is to get your Brain Age down into the 20’s. My brain age when I first started this game was 72. With daily training, you are supposed to get your brain age down. Another interesting thing about this game is that you have the DS Lite turned sideways like a book, and you use the stylus the whole time. 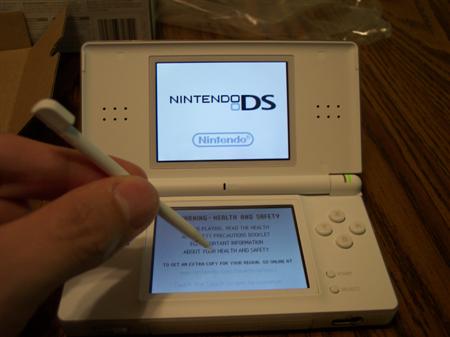 Well, there’s my little review of the new Nintendo DS Lite. I’ve really enjoyed playing it today, and I can see that there will be many more wasted hours with this device. So, I suggest you pick one up if you can find one early at a Target or Walmart like I did. If you can’t, you can still wait until it’s actual release date, June 11th.