Hey Pisanos! It’s time for a look at the Super Mario Super Show!

The phenomenon of Mario started in 1981, with the introduction of Donkey Kong. Mario was a carpenter back then, and didn’t even have a name. He was often referred to as ‘JumpMan’. He was trying to save his Neice Penelope from an angry gorilla. Who would have known that 8 years later that he’d have his own tv show. 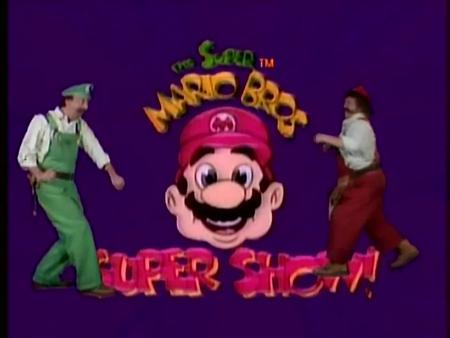 In 1988, with the release of Super Mario Brothers 2 on the NES, executives from Nintendo decided make any kind of money they could with their popular characters. One of their ideas was a tv show called ‘the super mario brothers super show’. Click on the picture above to see the opening to the show. This wasn’t the first time a video game was turned into a cartoon, don’t forget in the early 80’s, there was the Saturday Supercade on CBS.

This show was actually 2 shows in one. There was the live action show with former wrestler, Captain Lou Albano as Mario. There’d usually be some sort of guest start on each show too. In the middle of the live action, there would be a mario & the gang cartoon. 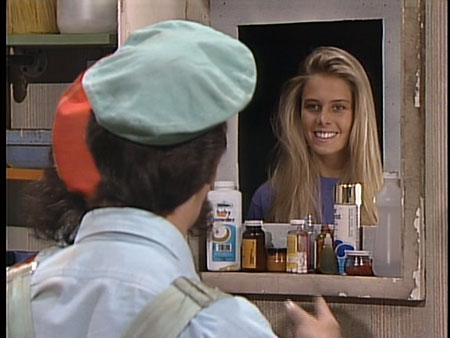 Today, Mario and Luigi are working on the normal plumbing crap when they hear a voice from the inside of their medicine cabinet. Who do you think’s in there? It’s Nicole Eggert. Many guys my age had a poster of her hanging on the wall of their room. She was on the show, Charle’s in Charge. 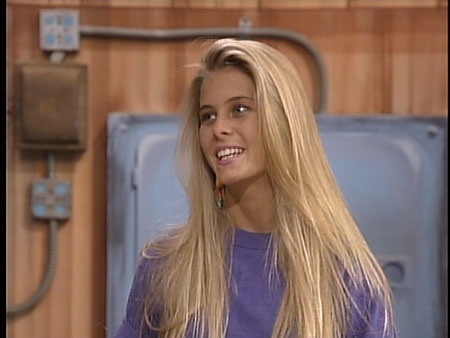 She’s got a kitchen sink that’s clogged, and she needs someone to fix it for her. 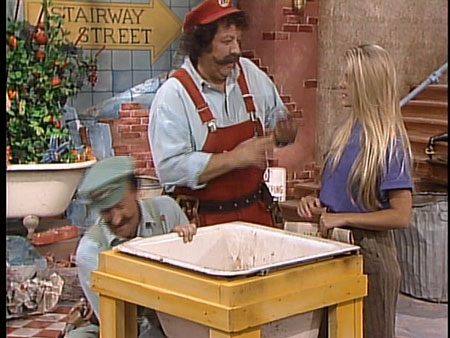 Mario & Luigi decide to show off by demonstrating to her how good they are at fixing a clogged sink. While Luigi does all the work, Mario oggles over Nicole. She was probably about 16 or 17 years old then. I think it’s a little strange seeing a 56 year old Lou Albano going crazy after her.

Of course it sprays Nicole right in the face. Now she’s all wet. And Mario & Luigi feel terrible. 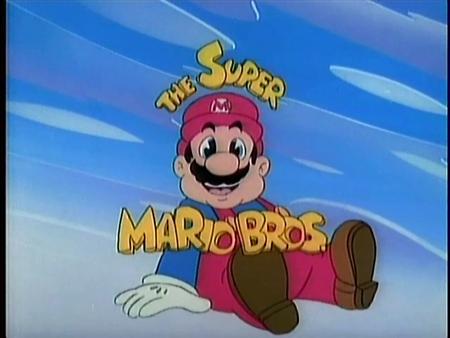 Before you get all interested in that story, there’s a break in the action, and it’s time for the Super Mario Brothers Cartoon. Click on the picture above to see the intro to this. Apparently cheezy rap was popular when this show came out, because the intro to the super show, and the intro to the cartoon are both rap songs. 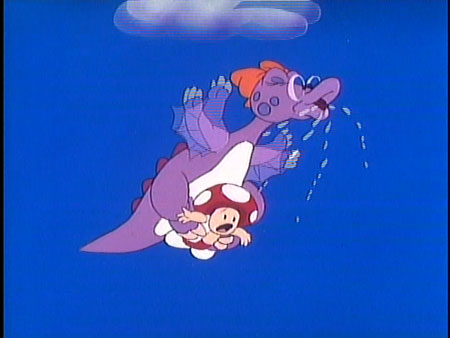 Remember how I said this show came out soon after Super Mario Bros 2? Well, you can totally tell by this cartoon. They have all the different characters from SMB2. In the first scene of this cartoon, Toad gets carried away by a near-sited Birdo. 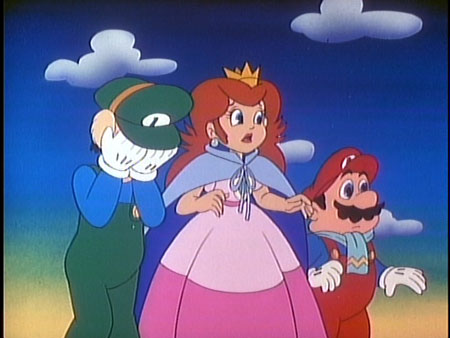 Of course the rest of the gang is really upset about birdo taking toad. So, they set out up the mountain to get Toad back from Birdo. 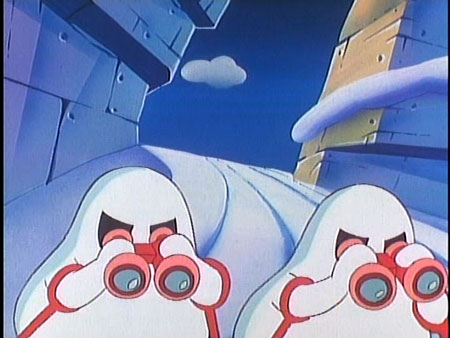 In an unrelated story, 2 of Koopa’s henchmen are watching Mario & friends. Because for reasons unknown, Koopa wants to get rid of the Mario Brothers. Why is he even after Mario? Mario doesn’t have any money, no special powers, nothing… What does king koopa have to gain by destroying Mario? 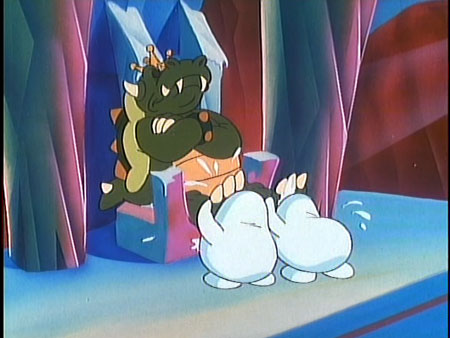 The 2 henchmen tell Koopa of their news of spotting Mario. He orders them to lick his feet. Yes, I said it, lick his feet. A very risque cartoon, huh? By the way, is there a difference between Bowser & Koopa? I never really understood the Mushroom Kingdom. 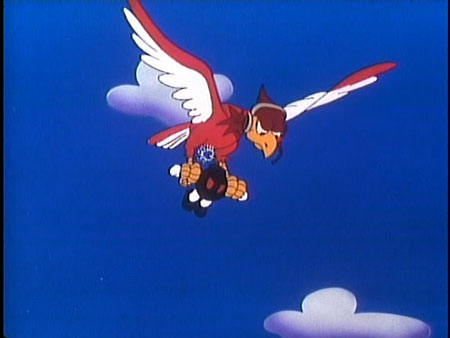 Koopa sends out some Koopa Troopa’s to drop some ba-bombs on Mario & Friends. If you don’t know about ba-bombs, they don’t explode on impact, they explode 3 seconds after landing.

Mario has no problem getting rid of those ba-bombs. Like a pimp, Mario smacks them out of his way.

After getting trapped in an avalance from the ba-bombs, Mario finds a Fire Flower. He touches it and becomes Super Mario. 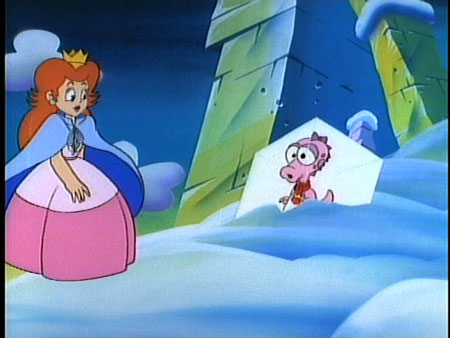 Princess Toadstool notices a frozen baby in ice. Instead of just saying, who cares, It’s a baby Birdo, It’s just going to grow up and try to kill me by shooting eggs at me. She says, ‘aww a baby birdo, lets save it Mario. I just realized something, Luigi hasn’t done a thing in this whole episode, what a loser.

So, Mario shoots his fireballs at the ice to melt the baby out of it’s frozen icecube state. 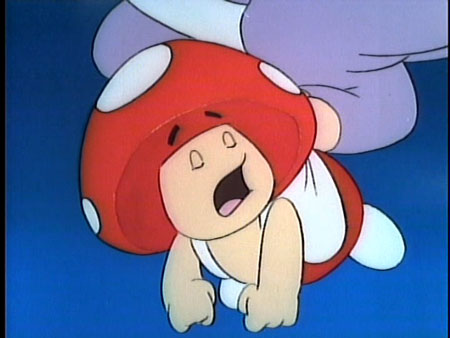 While this is going on, the Nearsighted Birdo takes Toad out for his first flying lesson. She just drops him from the sky without even giving him some pointers on how to fly. 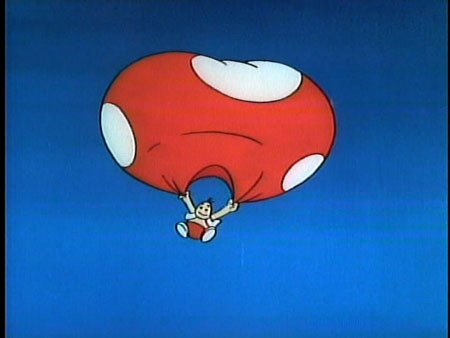 Toad, takes his hat, and creates a parachute with it. I don’t know how the hell it becomes so big, but it does. And this is the first and only time you’ll ever see toad without his mushroom cap. I didn’t even know it was removable. I would think that guts would spew out the top if it was pulled off. I was wrong, guess I owe you a coke. 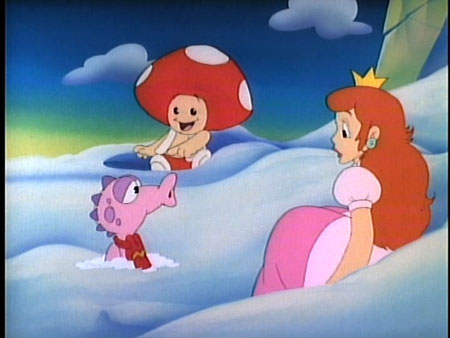 Toad fall right near the rest of the gang… Imagine that huh? And he quickly realizes it’s Birdo’s baby! 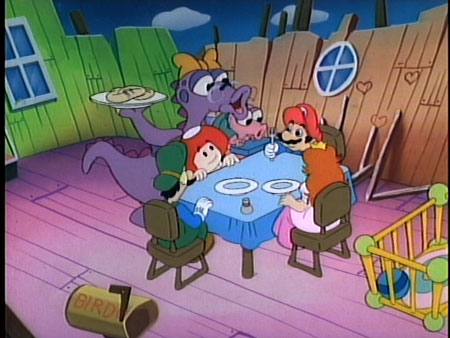 So, Mario, Luigi, Toad, & Princess return the baby to it’s mother. She is so greatful, she makes them dinner. Although it wasn’t pasta like Mario thought, it was a worm…. queue the maniacal laughter!

So, lets get back to our story with Mario, Luigi & Nicole Eggert. When we last saw them, Nicole just got squirted in the face. Luigi thought she should dry off in front of the furnace. 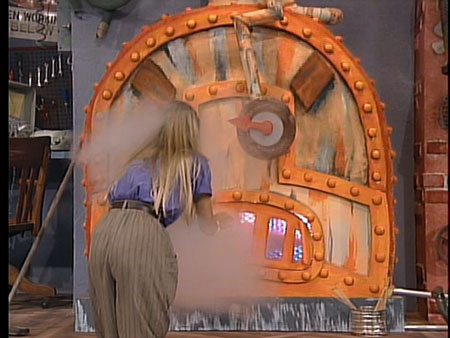 Bad idea, Luigi. That furnace is a piece of shit, when are you going to get that thing fixed?! 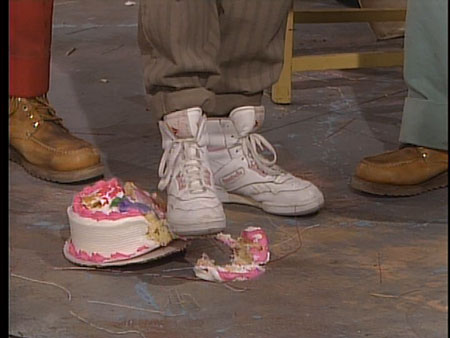 So, They take Nicole away from the furnace somewhere else. When walking there, she steps on a cake. Dammit!..

They tell Nicole to go ahead and take a seat in that chair over there. 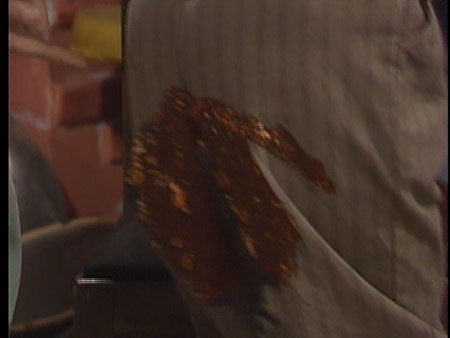 Oh yeah, that’s right, we put a pizza on that chair. Well, stand over there for a second. 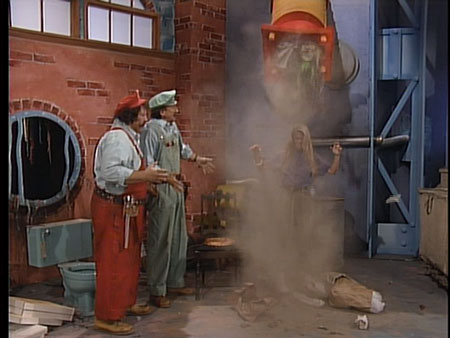 Suddenly, all sorts of trash start falling on Nicole’s head. What kind of crazy place is this? Mario & Luigi look relatively clean, how is that possible. Good thing this isn’t a restaurant, it would have been shut down long ago.

Mario & Luigi are so sorry for Nicole getting so messy. She said it’s okay. Okay?! Why?! Well, because she’s going to a party, and it’s a sloppy party. The person with the sloppiest costume wins. And now she doesn’t have to buy a costume. 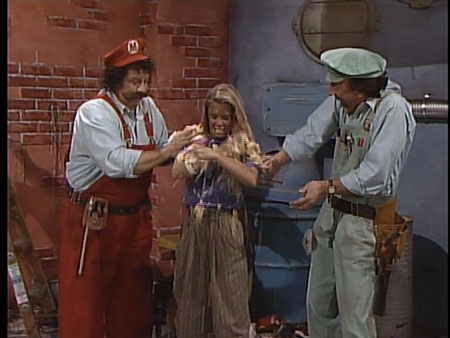 Since that’s the case, Mario & Luigi decide to cover her with the rest of the cake.

This was a heavy plot, and it went through many twist & turns which parallels my life completely. I’m surprised this didn’t win an emmy for writing in a sitcom.

Anyway, that’s my look back at The Super Mario Brothers Super Show. It’s now available on DVD. That’s where I got this from. I remember this show being a lot more interesting in my youth. Maybe I just need to get drunk while watching this again. Luckily, this was just a rental from netflix. If only they’d release the Power Team with Johnny Arcade to DVD. I remember that show was one of my favorites.

Oh one more thing before end this look at the Super Show. At the end of each episode, Mario would sing a song about a dance called ‘The Mario’. It was just lyrics sung over the theme to super mario brothers. It was probably the easiest dance I’ve ever heard of. I could be strung out on heroine and still have enough strength & agility to “Do the Mario”. Play the video above and find out how to ‘do the mario’

One thought on “The Super Mario Super Show!”