Back in the mid 80s there was a cartoon & toy called M.A.S.K. MASK was an acronym for Mobile Armored Strike Kommand. Yes, command was spelled with a K. It would be weird to spell mask with a c. MASC doesn’t even look right, so toy executives stuck with the K, and started their toy line. Today, I’m going to review one of the episodes of MASK. 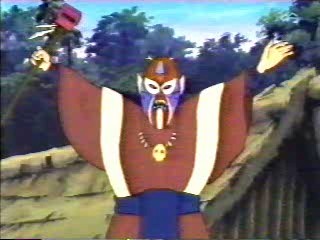 We start in a small island of villagers who worship some sort of masked leader. He tells the people that they need to kneel down before him, or the wind god would be mad and take them away. The strange thing is, this masked dude, has a thick jersey accent.

After he’s little speech to get them to kneel, he summons a tornado. The tornado whisks all the people on the island away into oblivion. 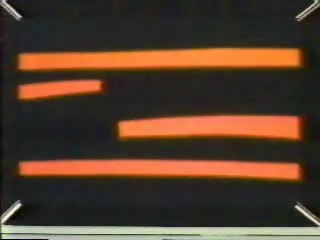 Of course, a reporter there, Sally, had her tape recorder on, and happened to record the masked leader. Matt Tracker finds out about this, and plugs the voice into the computer. They find out its their nemesis, Venom. Let me explain something, It’s very similar to GI-Joe or The Transformers. The transformer’s bad guys were called ‘decepticons’ & gi-joe’s bad guys were called ‘cobra’. It’s all a code name to represent a whole group of bad guys. So, Venom was the one behind the mysterious tornados & missing people. 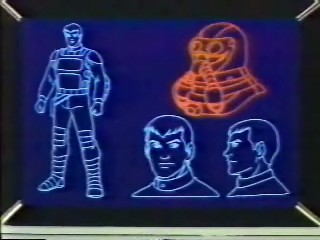 Every episode was the exact same. Matt would ask the computer what would be the best people to help on this mission. And every time they’d interrupt his crew of good guys in the middle of whatever they were doing. 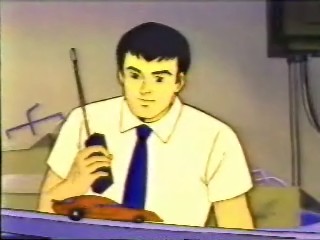 They’d be in the middle of playing with toys, giving a speech to the president, mopping nudie booth floors, eating dinner, paying for a hooker, or whatever. 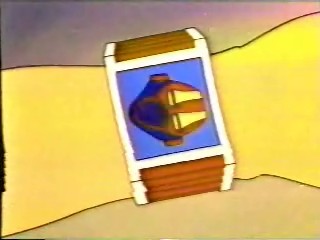 And they’d immediately stop whatever they were doing when their watch started beeping, to help out MASK. They never finish what their in the middle of, they’ll just stop and usually cause many people to get hurt or killed. Its like if they were saving a person from a fire, they would throw them back in the fire, and rush off to the MASK headquarters, without any repercussion. 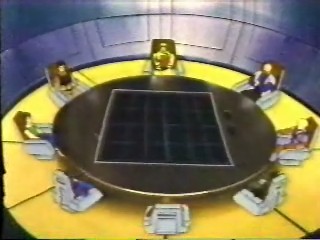 This is the inside of MASK HQ, also known as Boulder Hill. It looks like a gas station on the outside, but a secret headquarters on the inside. What if someone came up to get some gas? Would they somehow discover the secret of MASK’s hq? 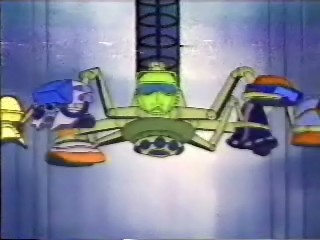 It is at this table where their masks are energized and given to each member of the MASK team. All the masks have some sort of power. Most of them are useless except for Bruce Sato’s mask. His mask is called lifter. It has the power to lift things. Yes, it’s that simple. We’ll get into more detail later. 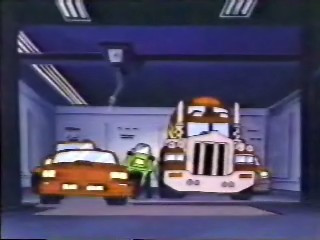 Somehow, all the members of MASK are able to drive their vehicles to an island. The problem is, only a couple of them can fly. So, unless you got Jesus driving one of those cars, how were they able to drive on water? 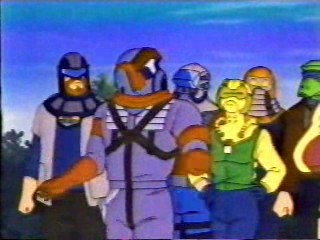 So, the gang makes it to the island, and finds that all the villagers have disappeared. Also, the hot blonde reporter, Sally, is also missing. So, they con Dusty into dressing up like a villager to trap Venom. 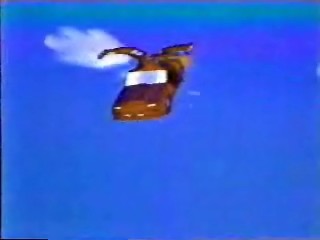 Matt takes to the skies to see if he can get a better look at what Venom is up to. 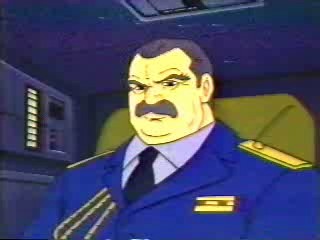 Of course, what was he expecting to find? Terrorists? Aliens? No, he found his arch nemesis, Miles Mayhem. Miles is the leader of Venom. And what clever plot does he have this time? He’s using the villagers as slaves to dig for Emeralds in his Emerald Mine. I’m not a writer or an archeologist, but why not go for a diamond mine. Are emeralds really worth that much? Maybe to leprechans, people born in Oz, & people born in the month of May. 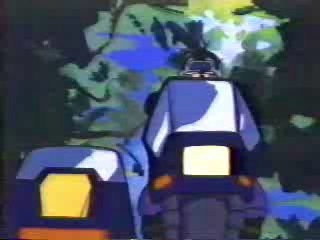 Meanwhile… the other members of MASK spot a Venom vehicle. So they chase after him. Why does MASK fall for this everytime? Anytime it’s really easy to chase a bad guy, they’re always setting you up for a trap.

So, guess what happens, Venom leads the MASK vehicles into some quicksand. How will they save the people stuck in the quicksand? 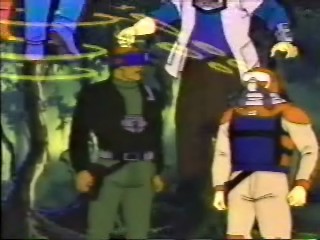 …. with Bruce’s mask of course. He shouts ‘lifter on’ and suddenly he shoots rays at the people in the quicksand. They lift out and onto dry land. They are puzzled on how to get the vehicles out of the quicksand though. Why doesn’t Bruce just use lifter to get the cars out of the sand? Well, apparently he can’t, so they use a wench on the big rig, Rhino, to get the other vehicles out. 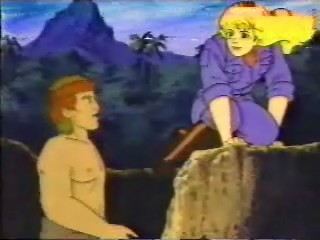 Remember how I said Dusty was dressed undercoer as a villager? Well, he finally finds Sally, the missing news reporter. For some reason she was put in the middle of a pit of snakes. Not just any snakes either, cobras! Dusty really doesn’t give a shit about the snakes though. He walks right through the pit no problem. Sally is freaked out about how the hell he is going to make it after being bitten several times by cobras. 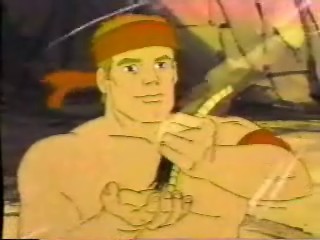 He shows Sally that they aren’t snakes at all, but just robotic snakes. What if he was wrong? Did he just have a hunch that the snakes were robots? Or did we not see a hidden metal detector in his loin cloth? I think it would have added some drama to the story if he was bitten by real snakes and had to be helicoptered away. But, they were running to the 20 minute mark in the show, so they had to wrap it up. 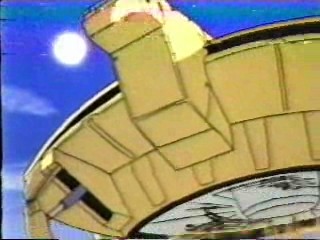 Venom is pissed off, because he sees that MASK is starting to foil their plans. So, they bring out that big ass wind machine again to conjure up another one of those artificial tornados. 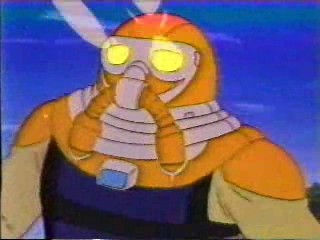 Matt radios down to Bruce to use the lifter to get rid of the wind machine.

The lifter?! Wait a minute, time out! Just a second ago, he couldn’t use lifter to lift a jeep & motorcycle out of some quicksand. Now, he’s going to use it to lift something bigger than a commercial airliner?! 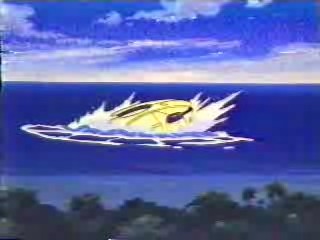 Logic Aside, Bruce lifts the huge wind machine up and throws it into the ocean. Of course after that Miles, has his patented, ‘I’ll get you next time, MASK’, saying. Why do bad guys in cartoons always wave their fists when they’re pissed off? Does anyone actually do that? I’ve waved my fist at a Murphy’s Law show, but I’ve never done it out of anger.

So, the day is saved and Sally is free. Like lots of cartoons, they have to end on a laugh. But, here’s the thing: I think they joke writers were on strike because this is the most non-funny joke ever. Plus, they’re laughing like they just saw a Mitch Hedberg show. Check out the video above to see what I’m talking about. (sorry about the quality)

So, that concludes my little tribute to an episode of MASK. Oh wait, I forgot about the moral lesson at the end of each episode.

Oh, and remember: Never stick a fork in a toaster!