Back in the 80’s, there was a trend going on in cartoons that I just now realized. You see, there was a gimmick for a few Saturday Morning cartoons in which kids from the earth get sucked into an alternate universe. I have three examples for you today. Next stop 1980’s nostagia…… 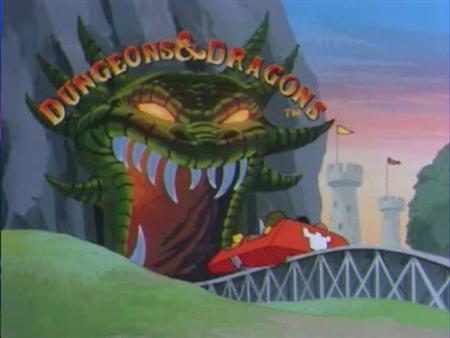 Back in 1983 cartoon makers finally decided to make a cartoon loosely based on the Dungeons & Dragons dice game. A cartoon like this would never be made today. I’ll tell you why. You would have parents who haven’t even played the game or watched the show making phone calls to the network saying it’s satanic & teaches about devil worship. Your average player is 42 and lives in his Mom’s basement. I doubt they’re getting out their devil worship message. 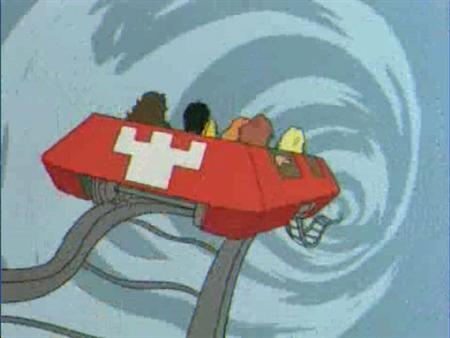 Anyway, back to the cartoon. It goes like this 5 friends, and 1 kid brother get on a ‘Dungeons & Dragons’ Roller Coaster Ride. In the middle of the ride they get sucked into a vortex and end up in a totally different world. They are all totally confused. 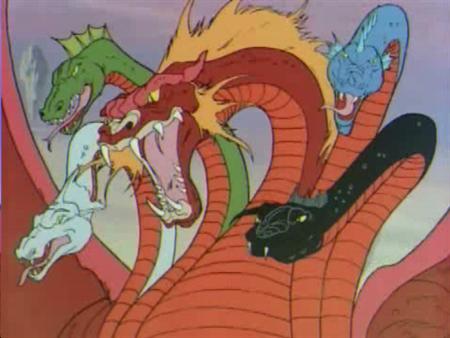 This world is filled with many strange creatures. The scariest of them all are the dragons. 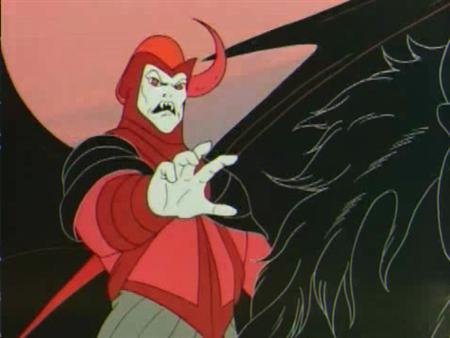 The evilest bad-ass in this world’s name is Venger. He’s always trying to ruin the day. But, the kids are always able to stop him with their powers. 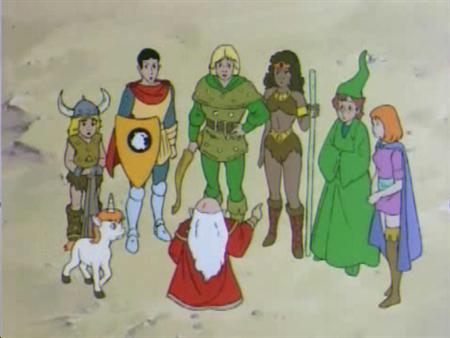 They meet the dungeonmaster who gives them their powers. Presto becomes a Magician, Bobby becomes a Barbarian, Eric becomes a Cavalier, Hank becomes a Ranger, Shiela becomes a thief, & Diana becomes an acrobat. They all have great magical powers except for poor Diana. All she hass is a pole vault which she can do flips & stuff, it’s actually pretty pathetic.

They spend the whole time trying to find their way home. The old DungeonMaster comes around to give them clues. He speaks in riddles though. Everytime they ask him a question, he walks behind a tree or a rock & disappears. In about 5 episodes, they’ve found a portal to get home, but they end up trying to help a friend instead of going home. Then when they’re done saving their friend, the portal is closed and they’re stuck. 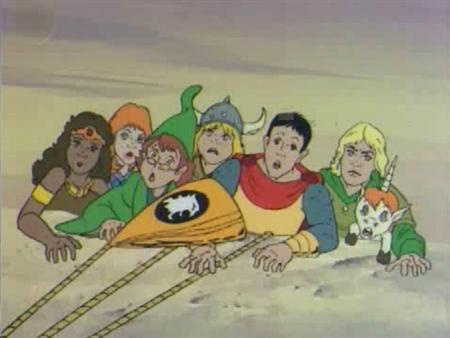 I did hear a pretty cool rumor about this cartoon though. Here’s how it goes: The kids actually died in a Roller Coaster Accident. They were sent to Hell. The Dungeonmaster & Venger are actually both they same guy, the devil. They just keep screwing with the kids so they spend eternity in Hell. Pretty wild, huh?

Let’s check out another sucked into another world cartoon of the 80s…. 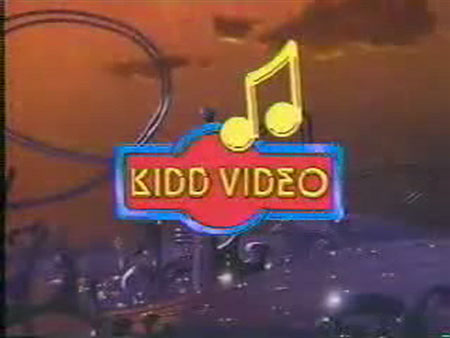 Back in the 80’s there were many pop-artists that were becoming huge money makers. With MTV, bands like Duran Duran, Culture Club, & Frankie goes to Hollywood were becoming huge. The cartoon makers needed to capitalize on the pop-rock success in a cartoon form on Saturday Morning. 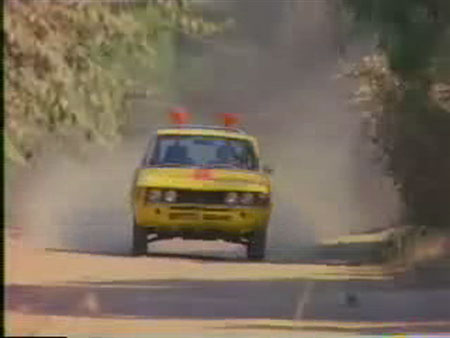 That’s where Kidd Video comes in. Here’s the story line for this one: A teenage garage band with a catchy 80’s pop sound gets together to rehearse their music. 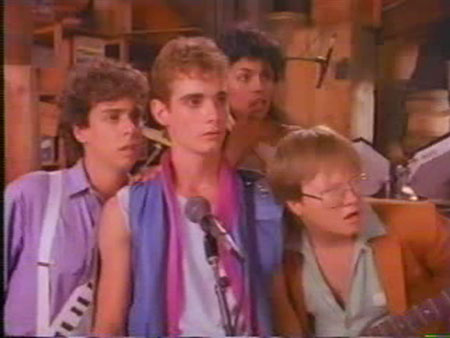 Okay here’s the band. You can totally tell this is the 80’s. Look at the suspenders, thin ties, & piano guitar straps!

And, here’s the intro! 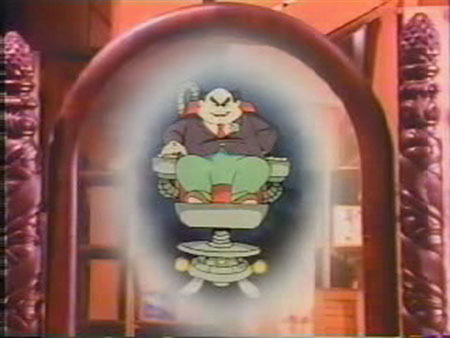 So, when they’re playing their kickass tunes a cartoon comes on the mirror. It’s Master Blaster, the evil Record producer. He tells them to come to the flipside, where they’ll be his musical slaves forever. 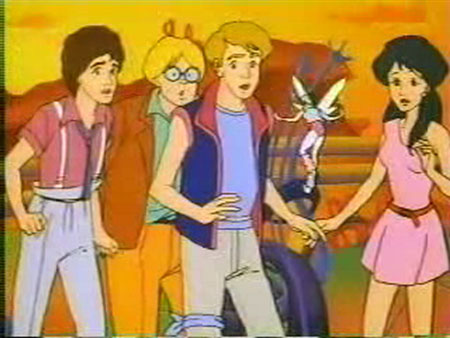 So, they’re now cartoons, and it’s the same story as D&D. They are trying to find they’re way home, but they have to deal with the evil Master Blaster as well. One of the gimmicks of this cartoon was that they would put popular songs from the 80s in the show.

Here’s an entire episode. For years I’ve been trying to figure out what cartoon had the phrase, “I I I we look like cartoons”.

The third cartoon comes from the late 80’s….

Since Nintendo was so popular by this time, they had to make a cartoon using these caracters. CBS made a whole video game saturday morning back in the early 80s with pacman, donkey kong, qbert, & pole position. So, it was time to cash in again. 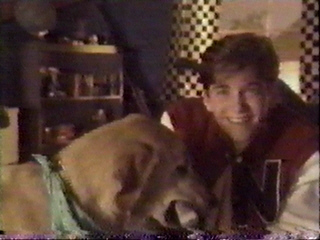 So the story goes… Kevin & his Dog, Duke were at home playing some nintendo games. He had his trusty nes-advantage controller. While playing a game of Punch out, all of a sudden he saw something different on his screen. 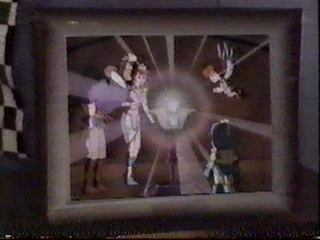 Some familar faces were on screen. For at the same time he was playing Nintendo, the N-Team was looking to find a new warrior to help them battle the evil in Videoland. So Kevin is sucked into the tv and heads for Videoland. 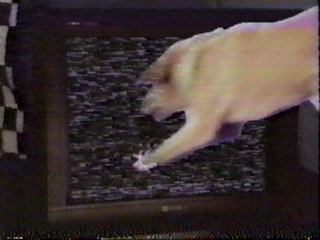 Duke, not wanting to stay behind, jumps in the screen after Kevin. 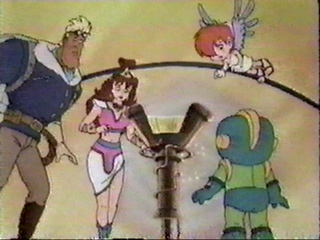 So here’s the N-Team: Princess Lana, Simon Belmont, Kid Icarus (who name is actually Pit in the video game), & Megaman. And now with Kevin, they were unstoppable. 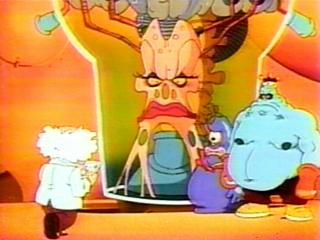 The N-Team battled the evil Mother Brain & her minions: Dr. Wily, King Hippo, & Eggplant Wizard. The weird thing about this cartoon is I never remember Kevin actually trying to get home. Maybe I’m wrong, but he was the badass of the group, who always got stuff done. They really made Simon Belmont a wuss in this cartoon. That kind of blows, because Simon is a cool vampire hunter in the video games. But, in this cartoon they made him just like vanity smurf. 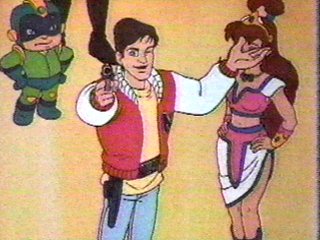 So, Kevin had a cool ass Nintendo controller Belt Buckle & a light zapper. He had the kid friendly red colored light zapper, not the grey one that apparently people had mistaken for a real gun. Anyway his controller could make him do anything. He could even pause. If I were him I would have been using that Pause button a lot more often than he did. I’m surprised he didn’t pause it to grab princess Lana’s boobs, but that’s just me.

So, that concludes my salute to 3 cartoons from the 80s, that had humans sucked into an alternate reality. Be careful out there because you never know, the next time you’re on a roller coaster, jamming with your friends, or just playing some video games, you might get sucked into a cartoon.

2 thoughts on “Sucked into the Animated World”