So, let me start with a little back story. Friday evening, my friend Josh, was driving home from work. He saw 2 billboards on the side of the road that talked about the new Michelob Ultra Amber. He called me up at work and told me about it. I immediately jumped on the net to find out about the new product. He told me it was called Michelob Ultra Dark, so I had problems finding it. I even went on Michelob’s website. There was no mention of a new beer. I told Josh he must be crazy.

Later on that night, Josh calls me about 11:30, and tells me that he’s on Michelob’s website and he says the new beer is on there and it’s called Michelob Ultra Amber. I told him there was no way because I had been on there earlier that night, and there was no mention at all of it. When I got home I checked it out and sure enough, Michelob had updated their page with their new beer.

Since we love to try a new beer that is out, we put in our zip code to see where the closes place to buy it is. On the Michelob’s website, we saw one of the closest places to get it was a place in Springfield, MO, which is almost 200 miles away from St. Louis. So, we started calling around local distributors. Unfortunately it was now Saturday and the distributors were all closed. We called a local liquor store, they said they never heard of it, and they said they usually get samples of any new AB products that come out. They haven’t gotten any samples yet, so they weren’t expecting to carry it soon. We figured it was probably the same way with all the local stores.

So, wanting to try the new beer, we finally opted to take a long road trip to try the new beverage. I called up a place called ‘Discount Smokes & Beer’. I asked if they had the beer in stock. They said they did, so I printed out a map, and we were on our way.

So, I drove, Josh & Keith were the passengers. We drove about 60 or so miles before we made out first stop. It was a piss stop. I picked up a full throttle thinking it would keep me awake since I was driving. If you’ve never had a full throttle, I actually thought it was a pretty good energy drink. It was very sweet and and tasted like liquid gummi bears.

So, I needed to fill up my gastank. So we stopped again about 40 more miles down the road. I also needed some food and something to drink. I grabbed a Sobe Energy, some combos, and some Planters Heat Peanuts. Josh Picked up some Pork Rinds. This place was very strange. It was a huge place called ‘The Candy Factory’. We didn’t get a picture, because it was pretty dark at the time. They had tons of candy inside, but the to ladies at the counter gave us the evil eye. I think they thought we weren’t from around there. They got mad when I paid them inside, but I hadn’t hung up the pump from my gastank yet. They kept telling me before I left to be sure to put the hose back up before I leave. I thought that was pretty weird, I wasn’t going to take off with the hose still hanging out of my tank. They told me they usually don’t let people pay if it’s not hung up yet. Very weird.

When we got back on the road, we realized it was going to take longer than we estimated to get down there. For some reason we thought it was only going to take about 1 1/2 hours. I don’t know what we were thinking. But when about 2 hours into our trip we saw a sign that said ‘Springfield – 93miles’, we knew it would take longer. 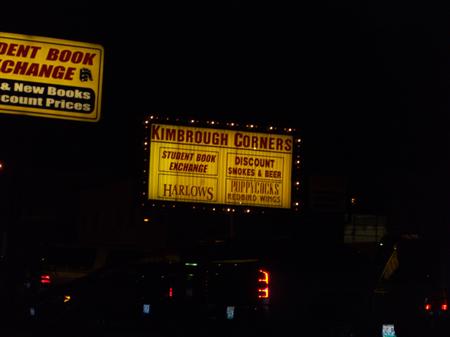 We finally found our destination! Springfield is a huge college town. It’s where Missouri State University is. It pretty much looks like the town was built around the school. We found the place though, and it was right new door to a student book exchange. Opting to keep our used books, we hit the ‘Discount Smokes & Beer’ store instead. I parked the car and looked at how many miles we travelled. 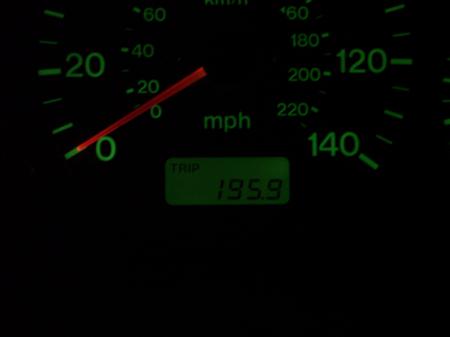 We drove 195 miles. All of it to try some new beer. We went in the store and found it. They only had it in 6 pack form, so we got 1 cold 6 pack & 5 warm 6 packs. It was nice seeing the college chicks walk in and out of the store, woo! Anyway, Josh & Keith tried it, I took a sip. It was pretty good. Since I was driving, I really didn’t want to partake in the drinking until I didn’t have to drive anymore. 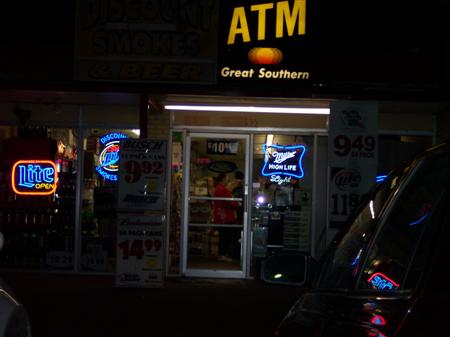 So, we waved goodbye to our destination, and headed back. Of course we had to take a piss stop right next door at the trashiest bar I’ve seen in awhile. It was a real dive. 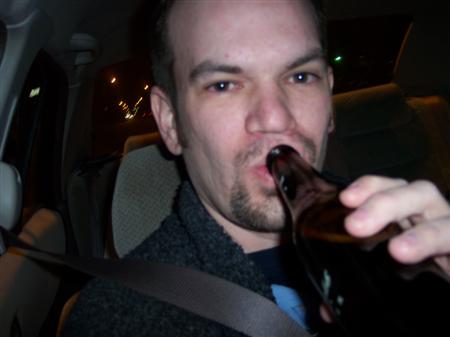 Here’s Josh trying the new beer. Both him & Keith said it was really good. 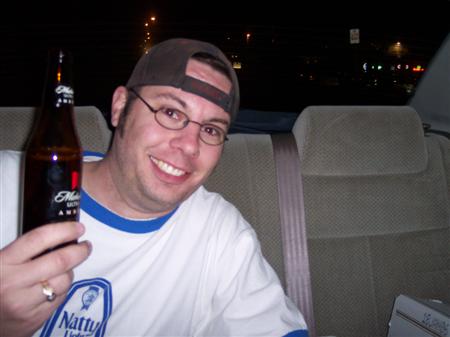 Here’s Keith & his Michelob Ultra Amber. I guess you’re asking what is this new beer. It’s basically the low-carb version of Amber Bock. It’s a very smooth dark beer. I’ll have a better review on it tomorrow when I talk about the superbowl party. That’s part of the reason we took this trip, to get some new beer for the superbowl party. 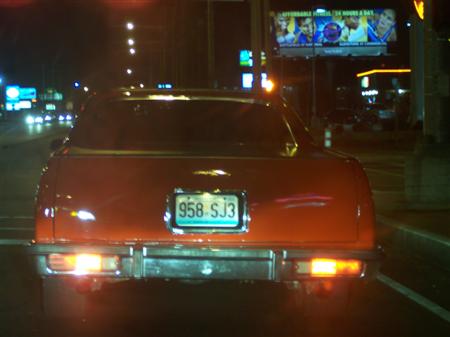 So, we followed this pimped up El Camino, and we saw another liquor store. We were pretty curious if this place had it too. So of course we stopped in. 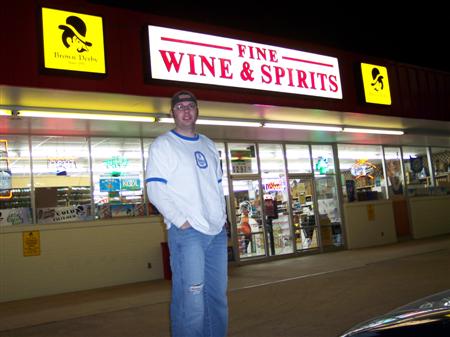 This place was called ‘Fine Wine & Spirits’ This was a huge liquor store. They had a few products that I’ve never heard of before. 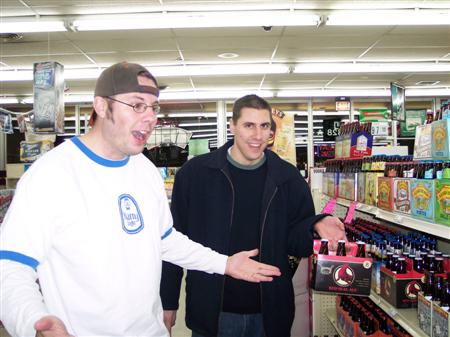 I spotted some Red Seal Beer. Keith spotted something else. I don’t know exactly what he saw, but from this picture he seemed pretty excited. 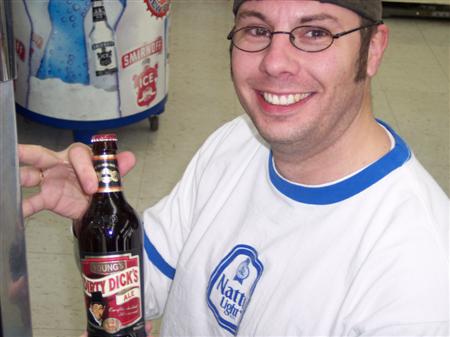 Keith found a beer that made him laugh. Josh and I have actually tried that beer before. I’m pretty sure it’s an British Import. We saw a bunch of other Holiday beers on the shelf, that probably shouldn’t have been on the shelf anymore. But there were a couple names like Santa’s Butt & Lump of Coal. I also saw something called Seaweed Beer. These were all individual beers, and they were about 5 bucks a piece, so we didn’t get any of those. 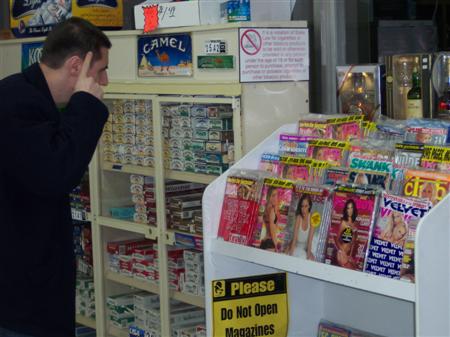 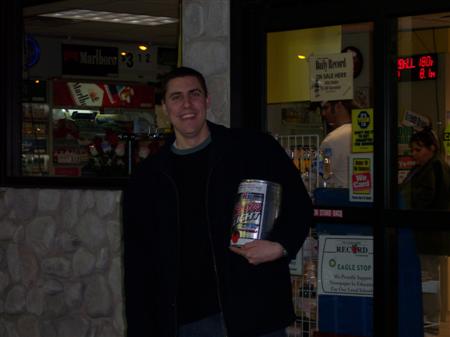 We made another piss stop before we came home. Keith & I went in the walk in beer cooler when Josh was in the bathroom. We found another little treasure. It’s a 1.3 gallon of Coors light. It’s in the limited edition SuperBowl XL ticket stub can. We had to get it. It was perfect for the Superbowl party. 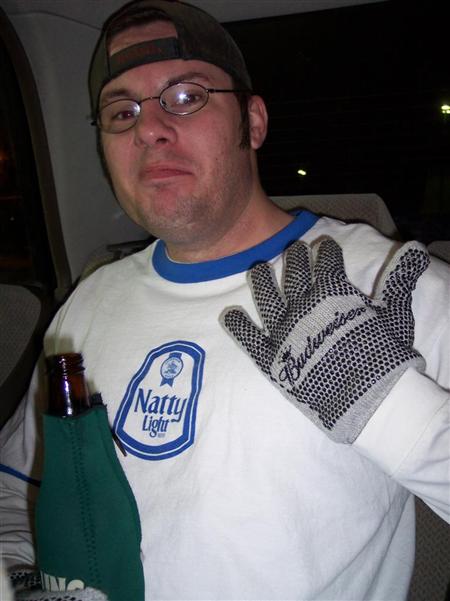 Keith found some cool ass Budweiser gloves there too. He didn’t buy Josh & I a pair, we were trying to make him feel bad that he didn’t buy us any gloves. I think it ended up working. But, we weren’t going to turn around to get gloves. 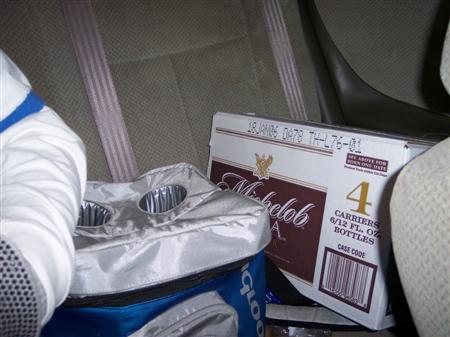 So, we took a stop at a taco bell before we got home, and our trip was over. It was a good time. And people probably think we’re crazy. But, it’s fun to just take a road trip for no reason. Anyway, I’m sure the stuff will be in stock in St. Louis soon, but it was a great trip.

2 thoughts on “A Long Beer Run”