Did everyone have a good Christmas. Mine was pretty good. Before I begin telling you of all the stuff I got, I forgot to show everyone what I did at work. You see there was a door decorating contest at work. The theme this year was ‘Candy Land’. They didn’t say if it anything else but that. Most people decided to make Candy Land board game related stuff. I wasn’t going to jump on board at first. But, I decided to do it anyway. Here’s what I came up with: 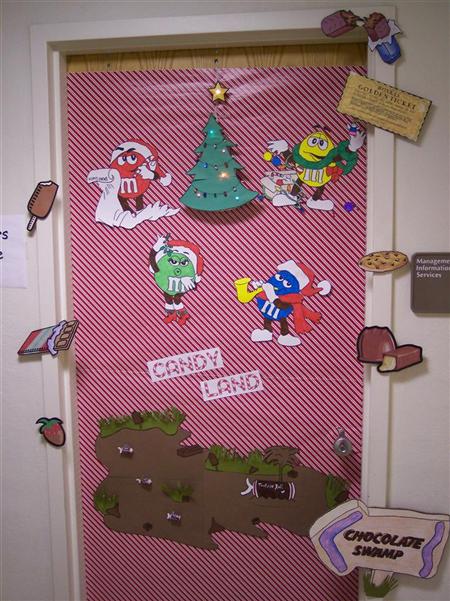 I ended up making the ‘Chocolate swamp’ part of the board game, candy land. It used to be called ‘Molasses Swamp’ but in newer versions of the game it’s called chocolate swamp. In the board game, there’s a character named ‘Gloppy’. I didn’t want to draw gloppy, because he looked like the shit-monster from the movie, Dogma. So I thought M&M’s would look better. Plus I had lights blink on & off on their tree. Oh, and in the swamp I decided to make the toostie roll whale. A few people didn’t know what the whale was. If you remember the commercial way back where they sing ‘Whatever it is I think I see.. becomes a tootsie roll to me’. Anyway, it was a compelling commercial. And needless to say, I lost the door decorating contest. First & Third place both made a candy land board on their doors. The second place team glued a bunch of candy to their door. So, anyway, I lost, I’m over it now, but I still say mine was pretty cool.

Okay, so… Christmas. Lets get to what I got for Christmas. A couple days before Christmas, my friend Laura stopped by work & gave me a present. She gave me some cookies & cupcakes she baked, and also these two things: 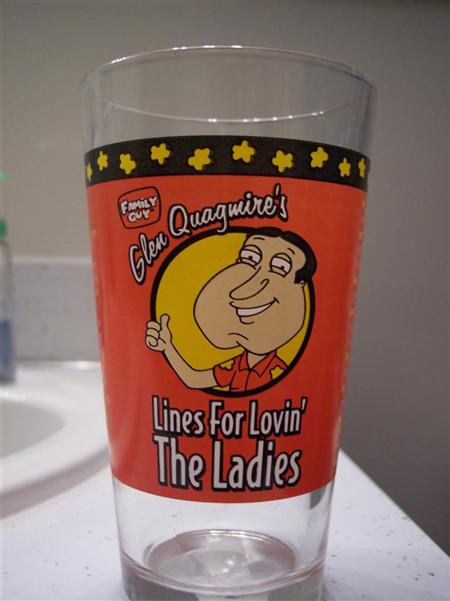 This kickass Quagmire (from Family Guy) glass. On the back it has about 100 or so different pickup lines. I think I’ve heard just about all of them on Family guy. Most of them are very innapropriate. 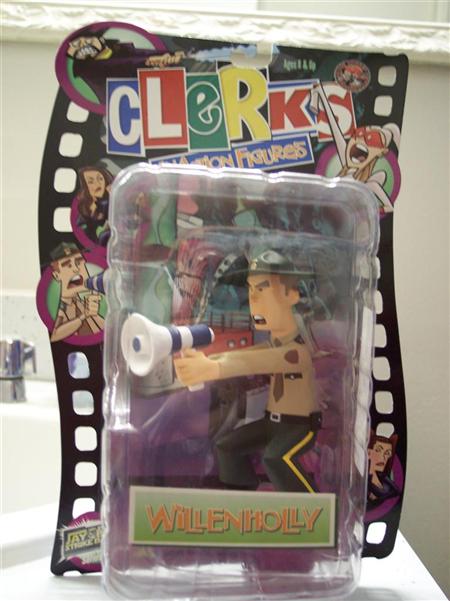 This figure is the Will Farrell character from ‘Jay & Silent Bob Strike Back’. The strange thing about this is: 3 days before Laura brought me this, my brother, Jeff, & I were up at the mall. While we were at the mall, we went into Suncoast Video. We would never buy a movie from suncoast. I mean the prices are like 30 bucks for a $10 dvd. Anyway, I go in there mainly to look at their simpson crap & action figures. So, I saw this very action figure and even pointed out to Jeff. 3 days later Laura buys me it. And, my brother doesn’t really know Laura, so it’s not like he could of told her. Anyway, I thought it was spooky. 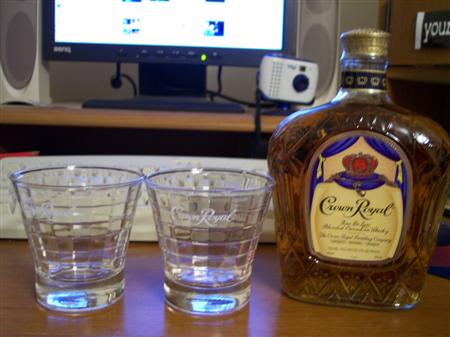 So, on Christmas Eve, the family went to my Aunt Joan & Uncle Butch’s house. We always have a secret santa exchange. I ended up with Jim’s name. He ended up with my name. He got me a Crown Royal gift pack. So, I got some hooch & a couple glasses. I got him some Guiness glasses & an airzooka. 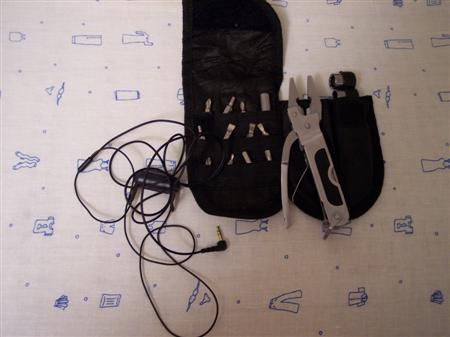 So, on Christmas, I ended up getting a leatherman type device that includes different screwdriver parts & a much needed new pair of earphones. My folks wouldn’t get me the $400 earphones I wanted, so I settled for some $20 sony’s. 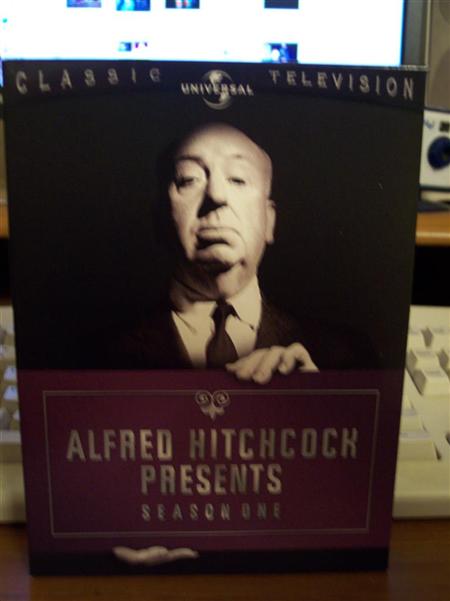 I also got ‘Alfred Hitchcock Presents’ on dvd. It’s got 39 episodes of that show. I love this show. I remember about 20 years ago when I could watch it on nick @ nite. It’s nice to see, they finally put this collection on dvd. 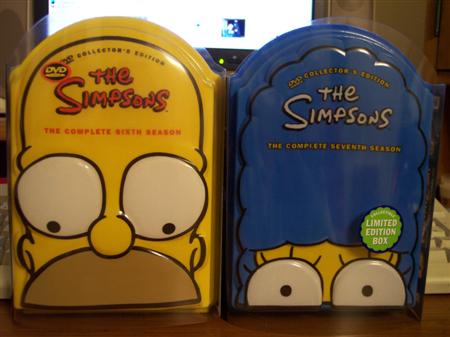 More dvds: I got Season 6 & 7 of the Simpsons. That makes me very happy. I have every season available now, except for season 2, for some reason I don’t have that. I’ll have to pick that up at the used dvd store one of these days. 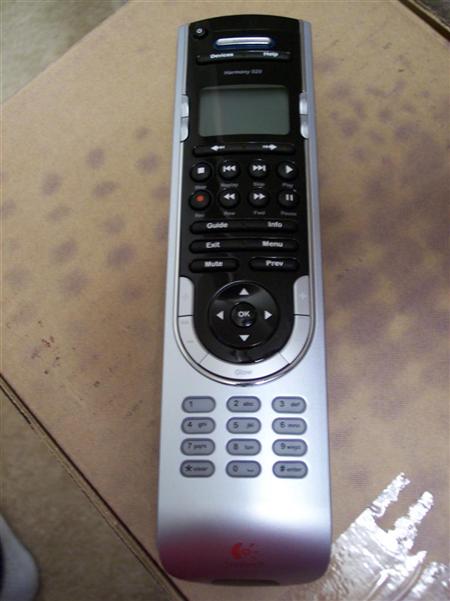 Here’s one that I didn’t know If I’d get or not. It’s the Harmony Remote. This universal remote can literally control ever device. It even can control the obscure stuff like: if you have a fireplace remote, it can control it, if you have a fan, it can control it, etc. The only problem is, I still haven’t been able to set it up yet. See, in order to set it up, you hook it up to your computer via USB port. Then you get online and tell it what devices you have. The problem is, Harmony’s website is totally flooded. I think a ton of people got these things for Christmas, because it keeps saying, Heavy Traffic on this site, try back later. Maybe I’ll eventually get it working. 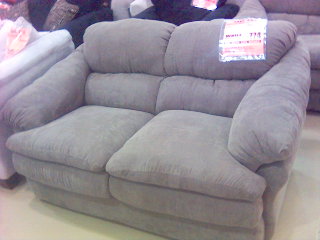 Oh, and I also got some money which I’m putting toward a new couch & loveseat I’m buying. Here’s a picture of the loveseat at the store. I took it with my camera phone, so it’s not the best quality. I’m picking it up on Thursday! 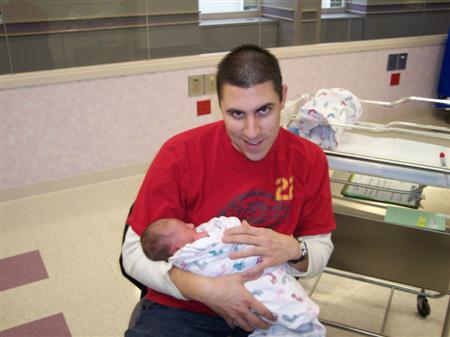 And here was the most unexpected present on Christmas. My new baby nephew, Logan, was born. He’s 8 lbs, 5 oz, & 19 inches long. I finally got to hold him today, so that was really cool.

So, I hope everyone got what they wanted, and feel free to tell me what you got in the comments…

5 thoughts on “My Christmas Loot”